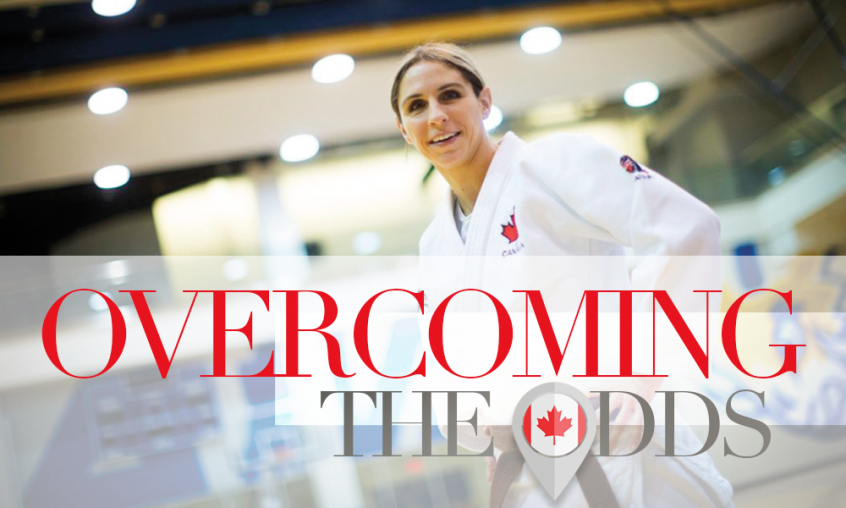 GROWING UP in Ontario, Canada, Priscilla Gagné had to fight for what she wanted. She loved to run and play like the other kids, but being vision impaired hindered her. In gym class, her activities were restricted. While playing tag, a game of running until you're tagged by another player, well-meaning adults cautioned Priscilla to be careful or slow down. "Ah! Forget about it," she'd say bravely. "Let me just run!"

Instead of walking to school, Priscilla always ran. She even made a competition out of it. "How fast can I get there this time?" she'd ask, challenging herself.

Priscilla learned early on that she had two choices: live in a bubble or take risks. She chose the latter.

While in high school, Priscilla joined an organized wrestling team for the vision impaired. She also competed on the cross-country team. Priscilla exceled in the sports so much that she dreamed of competing in the Olympics. Little did she know, that was a dream God also had for her.

In high school, Priscilla accepted Jesus as her Lord and Savior and wanted to grow in the Word. She attended a church pastored by Rhema graduates, and one of the girls in her youth group was attending Rhema Bible Training College. At that time, Rhema had a collegiate track team. For Priscilla, a Bible college with a sports program was perfect. She began RBTC in September 2005.

At Rhema, Priscilla joined Rhema's track team. Although she didn't compete in any races, she did a lot of long-distance running with a friend.

Priscilla always gives 110 percent to whatever she put her hands to. She made Rev. Kenneth W. Hagin's motto her own: "I cannot be defeated and I will not quit." It fit her attitude perfectly. Along with a solid foundation in God's Word, that will-not-quit attitude is what she needed for the task ahead.

After graduating Rhema, Priscilla returned to Canada and spent three years working with the youth in her church. During that time, another desire blossomed in her heart. She wanted to work with inner city kids, so she enrolled in a local college and studied to become an addictions counselor. She also began practicing judo.

Priscilla never does anything just to do it. She always has bigger plans. When she began judo, she dreamed of competing in the Paralympics, a multisporting event for athletes with disabilities. The vision seemed far-fetched. She was 23 years old and a newbie in the sport. But that didn't stop Priscilla.

After college, Priscilla couldn't find work in counseling. Her peripheral vision was a liability issue—a risk many organizations didn't want to take. She eventually moved to Ottawa, a blind friendly city. It is also the home of Takahashi Dojo, a well-known Olympian judo gym.

One day, while her dad was visiting, he asked if she checked out the gym. She told him no. She had promised herself that she would not sign up for the sport until she had a job to pay for it. Her dad suggested they check out the gym together. While there, her father signed her up for training and paid her membership fees. He wanted his daughter to go after her dream of competing in the Paralympics.

I Will Not Quit

At Takahashi Dojo, Priscilla trained with the Olympic coaches. She worked hard both mentally and physically. Yet, the road ahead looked blurry. She was an orange belt and not very good. But Priscilla stayed committed to her goal. And her motto "I cannot be defeated because I will not quit!" was fuel to her fire.

Priscilla's tenacious determination paid off. She went from an orange to brown belt in one year. Then a brown to black belt in two years.

"It was a very quick progression," she admits. "It was knit and grit. It was not technical. It was all God." The foundation Priscilla laid at Rhema kept her grounded in her dream.

Priscilla learned early on that she had two choices: live in a bubble or take risks. She chose the latter.

Priscilla's challenges were far from over. She moved to Montreal and began training at the Judo Canada National Training Centre. However, opponents didn't want to fight against her because she was visually impaired, and they didn't know who she was. They were the very best in their sport, and they weren't interested in fighting newcomers.

Priscilla refused to let their rejection destroy her confidence. She worked hard at the training centre to sharpen her techniques. And she meditated on scripture to overcome the rejection. Priscilla proved that she was someone worthy to compete against. The fighters took notice and opened up to the idea to fight her.

With God behind Priscilla, her success in judo rose. She won the bronze medal in the 52kg division at the Hungary World Cup for the visually impaired. Several weeks later, she won a silver medal at the Toronto 2015 Parapan American games. That win earned her the right to compete in the Rio 2016 Paralympic Games.

In Rio, Brazil, Priscilla had her heart set on the gold. With her faith in God, she knew nothing was impossible. On the day of her match, she was ready. Among the crowd of fans and spectators, were Priscilla's two biggest supporters, her mom and dad. They proudly watched from the stands.

In her first fight against Cherine Abdellaoui of Algeria, Priscilla lost. However, she bounced back with a strong performance against her second opponent. This win set Priscilla up to compete for the bronze, which proved to be an intense match.

In the final match, Priscilla competed against Sevinch Salaeva from Uzbekistan. Priscilla was ahead the first three minutes of a four-minute match. She was leading by a shido, which is a penalty. To seal the win, Priscilla came in for a shoulder throw, but her shoulder touched the mat. She was called for a yuko, which awarded the smallest amount of points to Salaeva. Unfortunately, Priscilla was never able to regain the lead. Her opponent won by a hair.

After the match, Priscilla gave Salaeva a hug, something she was prompted by the Holy Spirit to do. "On the inside, I was crying. I was so deeply disappointed," says Priscilla. "I was happy for Salaeva. Who wouldn't be happy to win a medal." The news media that covered the event called her act a true mark of sportsmanship.

Kids in the crowd surrounded Priscilla, wanting to take pictures with her. She was puzzled and wondered why they would want pictures with her—she didn't win. Priscilla heard the Holy Spirit quietly say, "You gave it your all and they admire that. They admire your walk."

Losing is never easy, but one thing Priscilla has learned is to never quit. Today she is training for the Tokyo 2020 Paralympics. Her attitude is still the same, "I cannot be defeated and I will not quit." With God nothing is impossible.

To learn more about Priscilla Gagné, go to facebook.com/Gagne86.