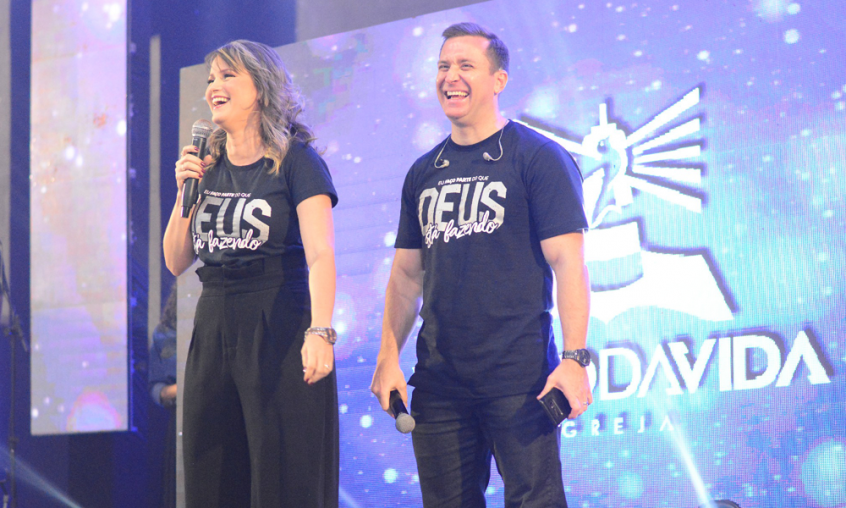 BRAZIL IS ON fire for God. Often when a local pastor asks his congregation how many feel His call or want to be missionaries, they fill up the altar. They’re hungry for Him and excited about His things.

It’s easy to see how the ministry Bud and Jan Wright (1983 RBTC grads) founded has contributed to what is happening in Brazil. Since Verbo da Vida (Word of Life) started in 1985, over 400 churches have sprung up across the country. In 2000, the Wrights’ Bible college came under the RBTC umbrella. Today, over 110 Rhema campuses are spread across Brazil.

Darren and Edma Wray began working with the Wrights in the late ʼ90s. After spending a year pastoring in Mindanao, Philippines, Darren (a ’96 Rhema USA grad) went to Brazil and began helping Bud and Jan.

Edma grew up in Aracaju, the capital of Sergipe, Brazil’s smallest state. She graduated from Rhema Brazil in 1997. The couple married in 1999 and six months later began pastoring Igreja Verbo da Vida (Word of Life Church) and heading up Rhema Brazil in Aracaju. Over time, their responsibilities have steadily increased.

Starting with 75 people, the church has grown to around 1,500 members. In the 23 years that Darren and Edma have been pastoring, leaders in their church have stepped out to pioneer 13 other churches and four Rhema campuses.

The more we sow into people and help them reach their calling, the more God’s love will manifest on the earth.

“I’ve always had in my heart to open new works,” says Darren. “But I always do it with a person.” He feels his call is similar to Barnabas’s, the Apostle Paul’s mentor. He helps others find their own call and get into their place.

“Over time, as we’re working with leaders in the church, some of them have come and talked to me,” says Darren. They’ve told him about a city or place God has put on their hearts. Darren works with them, and together they start a church.

Leo was a teenager when he came to Verbo da Vida. Eventually, he became the youth and young adult leader. One day he came to Darren and said, “I have Argentina on my heart.” Darren immediately said he would help. Nine months later, Leo, his wife, and Darren were on a plane to Argentina to spy out the land. They first started a church and later established Rhema Argentina.

Darren admits that it’s emotionally hard when a leader steps out to start a work. Those who leave are the ones producing the most fruit in the church.

“There’s a degree of sacrifice,” says Darren. “But at the same time, we understand the law of sowing and reaping. And we understand that part of what God has called us to do is multiply. That’s why I believe it’s so important to be constantly raising up leaders. If we don’t, eventually there won’t be anyone left.”

Lead With Your Successor in Mind

When an individual steps into a ministry position at Verbo da Vida, Darren instills in them the importance of mentoring their successor.

“If a department or ministry is worse off after someone leaves, that person wasn’t a good leader,” he explains. “They need to leave a ministry better than when they arrived. And it needs to continue operating after they’ve left. That’s when you know you were a good leader.”

With all Verbo da Vida’s outreaches, Darren and Edma won’t have any problems raising up new leaders. Church members are ministering in prisons, nursing homes, hospitals, delinquent centers, and schools.

But what excites Edma in particular are the youth. “I see this next generation on fire to evangelize,” she says.

On one evangelistic outreach, the youth went to a college testing center. (In the U.S., this would be similar to places where SAT tests are given.) The team brought water and sweets for the test takers and offered prayer before the exam. In addition to having their nerves calmed before the test, several young people accepted the Lord.

Sharing Christ Through the Arts

This past year, Verbo da Vida put on a Christmas play written and directed by a church member. More than 130 new visitors came to watch the performance, and over 20 people gave their lives to the Lord.

Something interesting happened one night. The play’s main character was named Emily. The story focused on the loss of her parents and what she went through afterward. It just so happened that a girl named Emily was in the audience. She, too, had recently lost her parents and was experiencing much of what the main character did. Emily was profoundly impacted as she watched the details of her life play out in front of her.

In 2018, the Wrays completed the first phase of their building program. They were holding four services every Sunday in their original building. Verbo da Vida bought two pieces of land and built their new facility debt-free. Bank loans to build a church are not available in Brazil. But God provided everything they needed.

Darren and Edma have plans to purchase adjacent buildings to continue the expansion of the children’s and youth departments and administrative offices. Being in the city, “we have to take advantage of the space and build up,” says Darren. “Maybe three or four floors high for classrooms and administration.”

Giving Honor Where Honor Is Due

When Darren went to Brazil in 1998, he had prayed that God would connect him to a mentor within the country. “When I was in the Philippines,” he says, “I was pretty much on my own, and it was kind of tough.” Those mentors were Bud and Jan Wright. The Lord connected Darren’s heart to theirs when they met.

“Pastor Bud was a father. He took care of us,” says Edma. “He and Momma Jan invested in us when we were young. Pastor Bud would say, ‘I was a truck driver and didn’t know a thing, but God does. So go ahead. You can do it. Don’t be afraid.’ I would encourage those in the ministry to be fathers and trust their people.”

Edma credits their success to connection. “All of this growth and everything that has happened in Aracaju goes back to the Verbo da Vida ministry,” she says.

Darren adds, “My pastor in Virginia, Gary Hoffman, has been a true father to me. When I was young, he helped me find my place in ministry. He invested in me to go to Rhema and the Philippines. And he has supported Edma and me the entire time we’ve been in Brazil.”

That is what ministry is all about—connecting with, investing in, and helping others. The more we sow into people and help them reach their calling, the more God’s love will manifest on the earth. Through that sowing and helping, we will see the exponential growth of the Church in Brazil spread to other nations.

To LEARN MORE about Darren and Edma Wray, go to darrenwrayministries.com.

» For Igreja Verbo da Vida to REACH 1 PERCENT of Aracaju’s population. (That would be 6,500 people. In two campuses, they serve around 2,000 people.)

» To ESTABLISH A CHURCH in the 10 largest cities of Sergipe state. (Currently, seven churches have been started.)