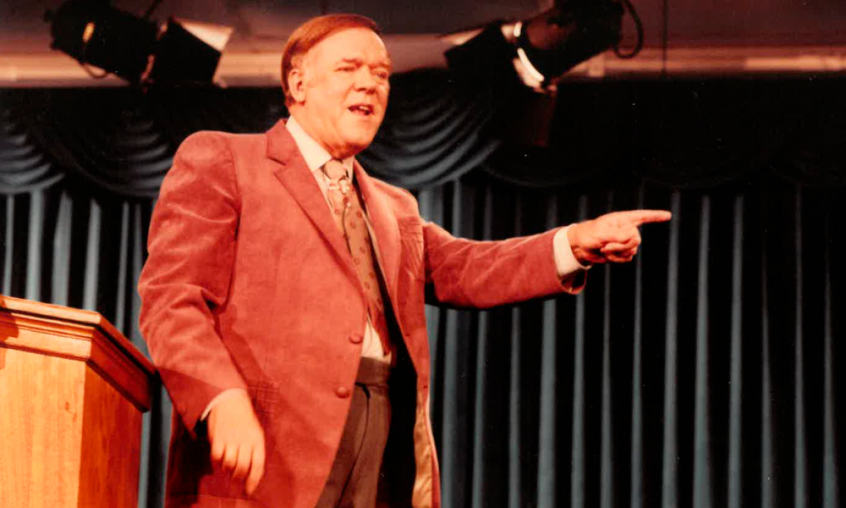 During old-time camp meetings in the 1800s, people often came in wagons, set up camp, and attended an outdoor tent revival. They weren’t in a hurry because they didn’t have to go anywhere, so the Spirit of God could move freely. Many would fall out under the power during the services. They called it “going into trances” in those days.

In January 1973, the Lord dealt with Kenneth E. Hagin about holding meetings where the spirit of old-time camp meetings would prevail. God instructed him to teach faith in the daytime and leave the night sessions open to the move of the Holy Spirit.

Below are excerpts from Brother Hagin’s and J.R. Goodwin’s messages. Key points from Roy Hicks’ message are on page 13.

I once heard a fellow preaching on TV. If I called his name, many of you would recognize him. He said, “Paul healed the man down there at Lystra because the apostles had that kind of power. They sort of carried it around as credentials for their authority. But when the last apostle died, all that ceased.” And to prove his point, he read Acts 14:8–10.

Never has there been a bigger lie told in or out of church than that. I’ve read some of that preacher’s books. He had a number of degrees after his name. There was LL.D, ED, XYZ, and Ph.D. I decided that Ph.D. meant posthole digger. It seemed to me like a common posthole digger would have had more sense than him.

I’m not belittling education. Thank God for it. But sometimes even preachers go to school and study everything except the Bible. They come out with a big education and an inflated ego but are depressed spiritually.

That’s the reason, bless God, we are going to start a Bible school right here on these premises—where the Word of God is taught. If you want a degree, well, get it somewhere else and hang it on a willow tree. Come over here and learn about the Bible and the Holy Ghost!

The Operation of the Holy Ghost

Jesus never did a single miracle on earth as the Son of God. He did them all as a man anointed by the Holy Ghost. And He never preached until He was filled and anointed with the Holy Ghost.

John 1:32 (NKJV) says, “And John bore witness, saying, ‘I saw the Spirit descending from heaven like a dove, and He remained upon Him.’ ” Acts 10:38 (NKJV) goes on to say, “How God anointed
Jesus of Nazareth with the Holy Spirit and with power, who went about doing good and healing all who were oppressed by the devil, for God was with Him.”

I’m going to throw something out. In the New Testament, you will not find where a single individual preached the Gospel until he was filled with the Holy Ghost. When Jesus was ready to go to Heaven, here’s what He told those who were with Him: “And, behold, I send the promise of my Father upon you: but tarry ye in the city of Jerusalem, until ye be endued with power from on high” (Luke 24:49).

Now remember, the disciples had been given power to “heal the sick, cleanse the lepers, raise the dead, and cast out devils” (Matt. 10:8). When they went to Jerusalem, they didn’t go out and start preaching. They waited.

When people know and confess who they are in christ and take advantage of that fact, they cannot fail in their christian life.

The Power of the Spoken Word

After a major trial in my life, I was directed by the Holy Spirit to do a study of God’s Word. I had been at the point of death, and I knew I was slipping away. I did everything I knew to do spiritually, but my condition didn’t change.

I thumbed through my Bible and came across a scripture where God said, “I will pour out my spirit unto you, I will make known my words unto you” (Prov. 1:23). After reading that verse, I asked God to make His Word known to me.

I began to study the word “word” in the Greek. As a former Bible college student, I was familiar with the Greek word for “word,” logos, which means “God revealed” and “written Word.” Jesus is the Logos of God. He is the revealed part of the Godhead.

As I studied further, I discovered another Greek word used for “word”: rhēma. The first time rhēma is used for the word “word” in the Bible is when Jesus was tested in the wilderness. (See Matthew chapter 4.)

In His greatest hour of temptation and physical weakness, Jesus rebuked Satan and said to him, “Man shall not live by bread alone, but by every word [rhēma] that proceedeth out of the mouth of God” (Matt. 4:4).

It’s important to note that Jesus didn’t use the word logos; He was the Logos of God! But being the Logos of God wasn’t the weapon Jesus used to successfully defeat Satan. Nor did He automatically overcome in the hour of weakness simply because He was the Son of God. It’s the same for you and me—nothing is automatic for us just because we’re Christians.

Jesus used the word rhēma when rebuking Satan. He was using the sword of the Spirit!

What is rhēma defined? According to one definition, rhēma is “quoting (speaking) the Word of God” (the logos). It’s the rhēma Word of God that imparts faith (Rom. 10:17). Rhēma is the sharp, two-edged sword of the Spirit that goes not out of the hand but out of the mouth.

RhEma is God’s creative power! Hebrews chapter 11 says that the worlds were created by the rhēma of God.

3 Through faith we understand that the worlds were framed by the word [rhema] of God . . . .

Jesus overcame temptation in the wilderness with the spoken rhēma Word of God, which is God’s power!

People read the Bible—the logos—all their lives and don’t have an ounce of faith! Why? Because they never speak God’s Word. They carry the logos with them to church, lay it on the coffee table, and pick it up for devotions, but they never learn the power which is rhēma. Many weaknesses exist in the Church because Christians don’t know the value and the power of speaking God’s Word.

Luke 1:37 (ASV) says, “For no word [rhēma] from God shall be void of power.” When we speak God’s Word, we’re speaking the same creative power God used to create the universe. That same power will create a new lung if you need one. God’s power will make new heart valves where the old ones rusted out. It will put new joints into your bones where the other ones were eroded by arthritis! Whatever your need, you have creative power in your mouth.

[Editor’s Note: This article was adapted from Roy Hicks’ Campmeeting 1973 message. It prompted Kenneth E. Hagin and his family to call the Bible school they were starting Rhema. Rev. Hicks passed from this life in 2008 after more than 60 years of ministry.]