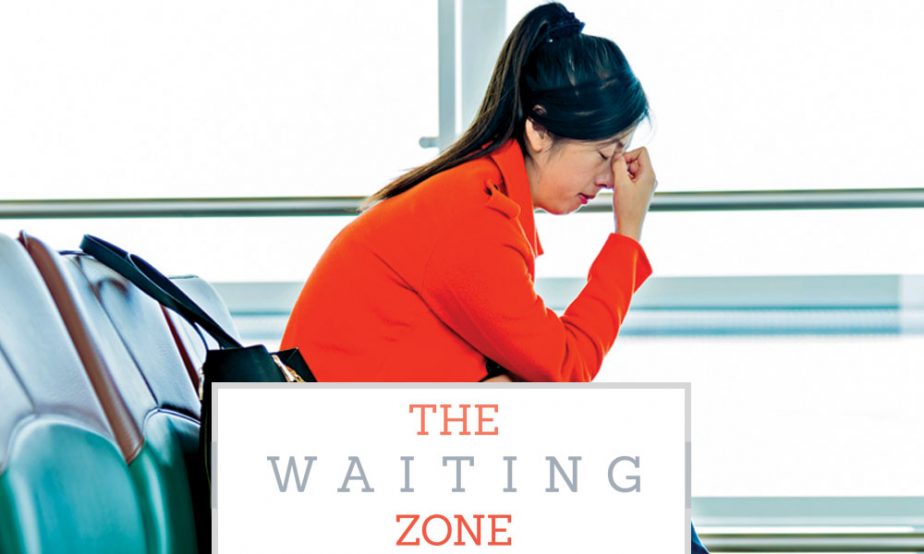 HAVE YOU EVER been tempted to try to rush through life—to hurry up so you could get to the "good parts"? I have. But to follow God's plan and fulfill our divine destiny, we have to go through different seasons. Psalm 1:3 (NIV) tells us that the godly person is "like a tree planted by streams of water, which yields its fruit in season." The key words in that verse are in season. We get so thrilled when we think about the prospect of yielding fruit. But it's easy to get discouraged as we wait for our season of fruitfulness. Really, waiting is something most of us don't like to do. We've been trained in today's society to expect everything to happen instantly. But God is never in a hurry.

Why does God make us wait at times? I believe in some cases it's because He's "seasoning" us. What do I mean by that? Well, if you've ever cooked a pot of beans, you know how much better they taste if you let them simmer for a while. When you cook those beans slowly, they absorb the seasonings much better.

When we find ourselves in the "waiting zone," it may be because God is seasoning us. He may be preparing us for

the things He's called us to do. And it's extremely important for us to learn how to wait. Isaiah 40:31 says, "They that wait upon the Lord shall renew their strength; they shall mount up with wings as eagles; they shall run, and not be weary; and they shall walk, and not faint." If you're suffering from weariness and you don't have a lot of strength, you can be renewed and refreshed as you wait on the Lord. But I know from my own experience that sometimes it's hard to wait.

But there's usually a waiting time concerning the things God speaks to our hearts. There's a right time and a wrong time to move on those things. If we try to accomplish them in the wrong season, they won't succeed.Lynette Hagin

The Lord told me many years ago that He wanted me to minister to women. And I thought, "Minister to women! God, that's the last thing I want to do!" It just wasn't my cup of tea.

For several years, I wrestled with the Lord over this calling. Every time I prayed about it, I would agonize and say, "Lord, please! I don't want to do that!"

Then God said something very powerful to me. He told me, "There are mighty things that I need these women to accomplish for Me, but they can't do it if they're having pity parties and feeling sorry for themselves. I want you to pick them up and put them on the road of victory instead of the road of despair."

Finally I surrendered to God's call to minister to women. As soon as I did, the Lord told me to wait. Oh my! But there's usually a waiting time concerning the things God speaks to our hearts. There's a right time and a wrong time to move on those things. If we try to accomplish them in the wrong season, they won't succeed.

I was 31 years old when God first spoke to me about ministering to women. But it wasn't until I was 55 years old that the Lord finally said to me, "Now is the time to minister to women." That was in early 2001, and I told Him, "God, if You want me to do this, I'm asking You to give me the plan."

The first thing the Lord said to me was, "I will gather around you an army of women." All of a sudden, I began to feel an excitement in my spirit. Since my husband had served in the U.S. Army and loves the Army, the Army is close to my heart. I immediately told the Lord, "Yes, I can lead an army of women if that's what You want me to do."

Then He continued, "These women shall be women of balance, longing to know how to balance womanhood, motherhood, and the assignment which I've called them to do. You shall lead the way . . . for these women have come, even as Esther came, for such a time as this."

When I heard those words, something exploded on the inside of me. I thought, "Yes, Lord!"

Then the Lord began to lay out before me the details of the first women's conference. He even told me who He wanted to speak and the date of the conference. It was toward the end of September. So our first conference was held right after the 9/11 terrorist attack on America. Little did I know what condition our nation would be in at that particular moment. But God knew. He's never caught by surprise.

At that time, much of the transportation system across America was shut down. Planes were grounded. Security was heightened. And people were calling us from all over the country, asking, "Are you cancelling the meeting?"

Does God ever cancel His plans? No! We weren't about to cancel that conference and let the enemy win a victory. I told my staff, "God will make a way for these ladies to come." And He did! That first year approximately 1,400 ladies attended the conference, including 100 ladies from the New York City area.

I stood on the platform that first night with tears in my eyes, because I saw before me an army of women, just as God had spoken to me about 25 years before. He had fulfilled every word He had spoken to my heart.

The plan of God for our lives doesn't come to pass overnight. There's always a season of waiting. Maybe you're in that season right now. Perhaps your dream has been on the back burner for so long that you think you've missed it.

I encourage you to spend time communing with your Heavenly Father and focusing on hearing His voice. Let this be a time of refreshing and renewing of your strength. Then you'll be ready to rise as on eagle's wings when the Lord says to you, "My child, let's go! Now the time has come!"