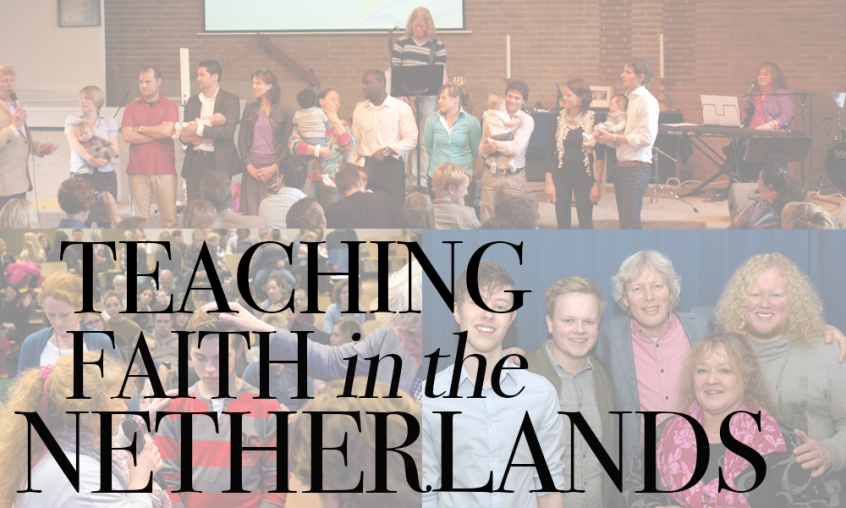 BERT AND LONNEKE VONKEMAN ('05 RBTC USA graduates) are changing the image of church in the Netherlands. Taking to heart Kenneth E. Hagin's mandate, "Go teach my people faith," they are seeing their church members firmly stand on the Word with miraculous results.

Although predominant denominations in Holland have been dwindling with many buildings sitting empty, Good News Church—which the Vonkemans started in 2007—is breaking that trend.

"Our church is one of only a few growing in this part of our country," says Bert. "Every year we see God take us to another level. More people come. Most of them stay. When they stay, they are really hooked up."

To attend Rhema in 2003, Bert and Lonneke had to sell their home in the Netherlands and give up good jobs. Having three young children, it was quite a leap of faith to move to the U.S. But they can testify that the Word is true and God is faithful. "God took care of us," says Bert. "And when we returned to Holland, He gave us everything back: a house, jobs—everything!"

After graduation, God led the Vonkemans to Enschede, which is near the German border. At that time it wasn't in their hearts to start a church, so they began helping others. In 2007, the Lord made a way for them to start Good News Church. Using a large room in their home, they began with eight people—their family of five and a young couple with a baby.

In the early days, news about the church spread through word of mouth. God told Bert and Lonneke, "I will exalt Myself, and I will bring the people to you." And He did. In a few months, they needed to rent a facility to accommodate all of the people!

The Lord showed Bert that there were Christians in Enschede who were searching for answers. Although many had left denominational churches, they had not left God. They were like sheep without a shepherd, and God brought these sheep to Good News Church. Men and women who had never heard the Gospel also found their way into this sheepfold.

From the beginning, Bert and Lonneke have poured everything they learned at RBTC into their church family. Once a month, the Vonkemans hold an informal class where their congregation learns faith, healing, how to be led by the Spirit, and more.

"Now we see this church arising with its own character and a strong faith foundation," says Bert. Today, over 150 people attend Good News Church. Although this may be small by U.S. standards, for the Netherlands, it's large.

"Now we see this church arising with its own character and a strong faith foundation," says Bert. Today, over 150 people attend Good News Church. Although this may be small by U.S. standards, for the Netherlands, it's large.

As members of Good News Church have learned to trust the Word of God, astounding things are happening. Some who should have died from cancer are alive and well. Couples who could not conceive are having babies. Marriages and relationships that were hopeless or abusive are now mended and strong. And miracles, whether gradual or instantaneous, have become a normal part of life.

The Baby That Breathed

When baby Joab was born at home, he was not breathing. The midwife panicked, but his parents, Niek and Elise, immediately acted on their faith and declared that their fourth child would live and not die. Joab was rushed to the hospital with Niek. While Elise was still at home recovering from birth, she sent a message to the church before heading to the hospital.

As the church was praying, the Lord showed them how He breathed life into the child, just as He had done with Adam. At the same time, Niek was looking into the lifeless face of his baby and felt that he needed to breathe on the newborn, which he did in faith.

Suddenly air filled the baby's lungs! The doctors expected significant problems because of the lack of oxygen, but they found that Joab was regaining all of his vital functions.

Miraculously, after just one night in the hospital, Niek and Elise were allowed to take Joab home. And today, despite the doctors' predictions, he is a very healthy, active 2-year-old boy!

While playing with a neighbor, 8-year-old Joshua was pushed through a glass door and severely cut his arm. The neighbor called his mother, whose name is also Elise, and told her to come quickly. When Elise arrived, blood was everywhere. Before calling 911, she first called on the Lord and stepped into faith. She declared the Name of Jesus and said, "This is not going to happen." The bleeding immediately stopped.

As Joshua and Elise were rushed to the hospital, Elise alerted the church, and the leaders began to pray. During surgery, the doctors discovered a severed artery along with severed muscles, tendons, and nerves. They were amazed that the bleeding had stopped. Their prognosis, however, was not good. They said that Joshua would never be able to bend his fingers or use his arm.

After surgery, Joshua told his mother, "Do you remember when I was lying there and you began to pray? Jesus stood by me and put His arm on my shoulder!"

Through patience and faith, Joshua has regained full use of his hand and arm. "Everything I've learned over the last eight years in this church," says Elise, "I've had to use in this process—everything."

"Faith doesn't necessarily prevent disaster from coming," says Bert, "but it always helps us to overcome, as we've seen time and time again." Members of Good News Church know this to be true. They overcome whatever comes their way. Some healings don't happen immediately, but they keep standing in faith until they receive what they're believing for.

One of the ways people are learning faith is from the Christian books Bert translates into the Dutch language—a few being In Him and I Believe in Visions, as well as Christ the Healer and The Miracle of the Scarlet Thread.

The Word is also being sown through song. God is inspiring Lonneke with songs that flow with the theme of her husband's messages. The Vonkemans have learned that these God-inspired songs stay with their church members and carry them throughout the week.

Good News Church has moved beyond its four walls to be a blessing in faraway places. Their support of an elementary school in the Dominican Republic ensures that 191 children daily receive food and a Christian education. They also support and stand in faith with a pastor in Sri Lanka who faces great opposition because of his Christian beliefs.

Bert and Lonneke are committed to teaching faith. "There's an anointing on the mandate," Bert says. Not only has the message of faith changed their lives, it's now changing the lives of the Dutch people and beyond.

A CHURCH BUILDING—finances and favor with the government

TO LEARN MORE about Good News Church in Enschede, visit goednieuwsgemeente.nl.
(The website is in Dutch, but most browsers will translate the language.)