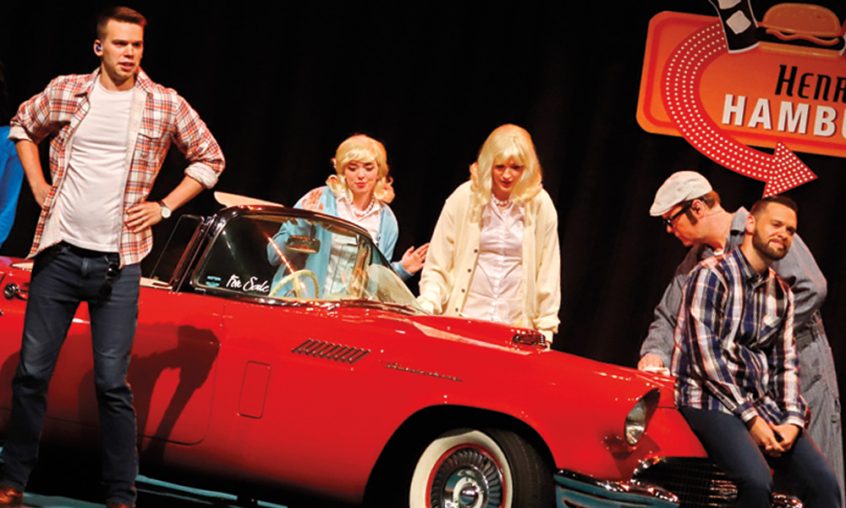 ROCKETS OVER RHEMA began with a song and a dance. Route 66: The Red, White, and Blue Tour, a musical with a patriotic twist treated the audience to American history, a budding romance or two, and some heart changes! Even Lynette Hagin’s red Thunderbird played a role as “Ruby,” and Kenneth W. Hagin had a cameo as the driver hired to keep Ruby safe. Amidst the laughter and ’50s music, a warm ovation honoring veterans and active military personnel filled hearts with pride and gratitude.

After the show, people flooded outdoors to experience family-friendly fun across the Rhema USA campus. Synergy Band kicked off the main stage concerts with songs full of praise while crowds visited food trucks and vendor booths lining the walkways. From sticky-fingered children to wide-smiling adults, all enjoyed the fare!

There was something for everyone to experience—inflatable games for kids, giveaways, an impressive car show—even a special opportunity to win $300 toward tuition at Rhema Bible Training College. Lawn chairs and picnic blankets held young and old. Grassy areas were a family favorite. Kids danced to the music with glow-in-the-dark necklaces and balloons on sticks. Beat the Heat was on hand to promote its safe driving message. An occasional revved engine from one of their two hot rod patrol vehicles signaled enthusiasts to investigate the car show. The exhibition featured a wide array of vehicles—classic to modern, foreign and domestic, hot rods and rat rods, specialty cars, and even custom motorcycles.

In the meantime, Brian Nhira and his talented band hit the stage with energy and passion. From haunting guitars and airtight vocals to intense driving rock, the message was one of finding true love in God. Brian addressed his hometown Tulsa crowd, “We want your dreams to be inspired. And we want you to love deeply!”

Consumed By Fire followed with their earthy blend of Gospel and early rock influences, which the three Ward brothers have distilled into a southern pop sound uniquely their own. Their unity and artistry displayed an unapologetic pursuit of Jesus and faith in God. As they introduced “Hold the Rain,” they bolstered the crowd with emphatic encouragement from Mark 11:23, “You gotta speak to the mountain!”

The final band, Citizen Way, focused the night on Jesus with transparent stories and evangelistic compassion wrapped in upbeat pop and soul that would often give way to classic hymns. The audience took over with “How Great Thou Art.” By the time “Amazing Grace” was shared by the crowd, many hands were raised in honor to God. People were invited to connect with Jesus, and the evening was sealed as the lead singer, Ben Calhoun, proclaimed, “I love my country! But my citizenship is in Heaven!”

The sun set and cooled the day as people settled in to watch the fireworks. As campus lights dimmed, people stirred with anticipation. Eyes followed the first light trails until a fireball erupted in the sky to ripples of oohs and aahs. The glittering grand finale and an explosion of applause marked the celebration of our freedom—as both patriots and Christians