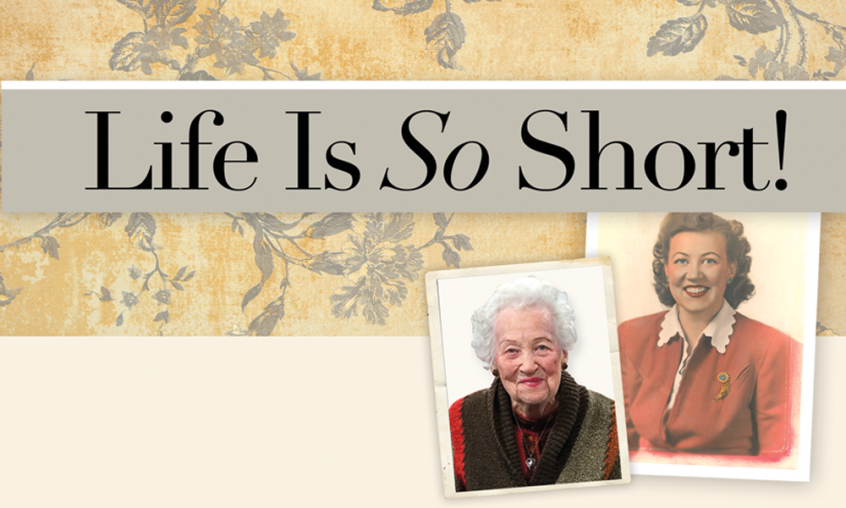 LOIS MEYER was alone. Her husband had passed away. Her daughter was grown and married. Her long career in education had been rewarding, but she yearned for more. With only her miniature dachshund as an audience, Lois sat by the kitchen window talking to God.

Planes passed overhead. Lois watched, her heart full of longing. "Lord, everybody is going somewhere but me. I want to go somewhere! Take me somewhere." And God did—all around the world!

Lois' prayer took flight, and the Holy Spirit prompted her to attend Rhema Bible Training College. She never hesitated to leave her long-time home in Michigan for an unknown future.

While her peers enjoyed retirement, Lois boarded a bus headed to Tulsa, without even a place to stay. She trusted God every step of the way and watched His faithful provision unfold. Before long she was living in Oklahoma, studying at RBTC, and cleaning homes for ministers. Eventually she began living with the families of ministers, caring for their loved ones while they traveled.

After Lois graduated from Rhema in 1977, the 67 year old embarked on her global journey starting in the Philippines for six years. "That was my first mission station," she recalls. "The first time I spoke and then prayed for people, it scared me a little. They went down like firecrackers!" Someone in the audience ran up and tried to hold the people upright.

But Lois knew it was God. His anointing and presence that she described as "a soft, soft something" going through her was there as she prayed. "Something" was happening on the island, and God was using a retired teacher to do it!

Lois spent the next 21 years on the mission field in 19 countries. She taught, preached, prayed, and cared for people from Hong Kong to Peru, China to Bolivia, and many Spanish-speaking countries. Healings happened everywhere she went.

When an assignment in a country was coming to an end, Lois always asked, "Lord, where do you want me to go next?" And He always told her. One time He answered, "Bolivia." "For how long?" Lois asked. "Ten weeks."

When she arrived in Bolivia, Lois learned that the Bible school run by the missionaries she was helping was only on Saturdays instead of every day. She wondered what she would do during the week for 10 weeks. But God knew.

The missionary couple Lois was helping had two school-age girls. When she noticed how busy the parents were, she offered to help with the youngsters' schooling. "I have a teacher's degree," she piped up. "Do you want me to do it?" The family eagerly accepted. Through the years on the foreign field, God used Lois as a personal teacher to eight children.

Adventures in the Orient

Not one to be afraid, Lois smuggled Bibles into China nine times. She hid Bibles under her clothing, traveled alone, and covertly made transfers without speaking a word. Although she worked with a group of about 20 people, they never traveled together.

"If they [the authorities] discovered one person had Bibles, they'd know we all had them. We were loaded with Bibles!" When she met her contact person, they appeared as strangers. She would surreptitiously take the "stranger's" empty suitcase into the restroom and fill it with Bibles.

"In Hong Kong I had to climb about 85 steps to get to my house. I took a few steps at a time and waited a minute," Lois reminisces. "Over in the distance was a beautiful Buddhist temple. But something rose up in me when I saw it. I knew what they were teaching, and I wanted to lash out at the devil!" She commanded Satan to get out of that temple in Jesus' Name.

From that day, whenever she went out on her veranda and saw the temple, that same burden rose up in her. She spoke it out every time. Eventually, Lois moved on to another assignment. But later she heard from missionary friends that the temple had closed!

Kicking the Devil Out

Relying on the power of God and using her authority in the Name of Jesus against darkness is nothing new to Lois. "Oh, I kick the devil out all the time," she laughs. She reminds him of Matthew 28:18 (where all power is given to Jesus) and Luke 10:19 (where Jesus gives power to His followers). "I've got [that same power] devil," she tells him. "I kick you out in the Name of Jesus and command you to leave me alone."

It's one of her "secrets" to staying in good health and enjoying old age. "He [the devil] knows he cannot thrive in my house," Lois declares. Anytime she feels the least little thing in her body, she commands it to leave.

Decades ago she laughed off those who used their authority in Christ. She thought it was kooky. But not anymore. "Thank God I learned how! That's why I've lived so long," exclaims Lois.

Looking back over her life, Lois says that if she had known how exciting life would be, she never would have worried about the future when she was young. Although she retired from the mission field a little more than 10 years ago, her mission is far from over.

She holds prayer meetings and "hymn sings" at her retirement home, finds herself sought after for prayer, and is currently writing a book about her life and the miracles she has witnessed. And she has more book ideas in the works.

As she turns 100 years old in November, Lois Meyer's eyes sparkle with youthful adventure as she exclaims, "Life is so short!"

Q: What is it like to grow older?
A: As long as you're a Christian, it's fun to grow old! You live each day as it comes and get wiser all the time. You have experiences that make you wiser, you learn more about people, and you have more confidence.

Q: Do you have an age you want to live to?
A: That's up to the Lord. I'm ready to go any time, but I tell Him, "I don't have the work done You gave me to do." I'm in the middle of writing a book. The name of it will be Step by Step With Jesus.

Q: What is your next big adventure?
A: Going to Heaven! I don't know why people have to be sad about going to Heaven. It's the most unique, awesome, exhilarating thing you can do at the end of your life!

Q: What do you like to spend your time on?
A: On what matters!