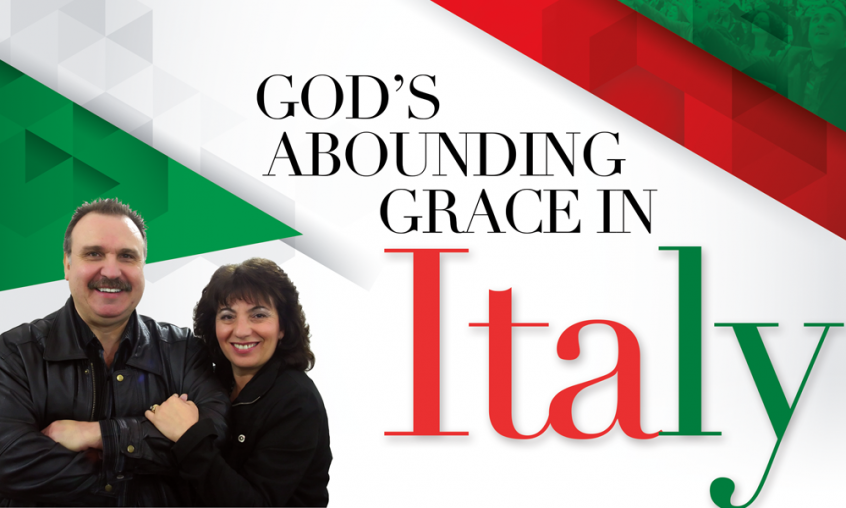 KNOWN FOR its rich culture and ancient heritage, the boot-shaped nation of Italy is home to some of the oldest architecture in the world. Some of these aged structures date back to 70 A.D., their stoned foundations still standing strong.

One strong foundation of the Italian culture is family. Loyalty and devotion are integral parts of the family dynamic, whether immediate or extended. However, one relationship that is seen as being far-off or impossible to have is a personal relationship with God.

Less than two percent of Italy's population are born again. Many have never heard the message of God's gift of grace and righteousness preached. God doesn't want anyone to perish. So He orchestrated a way for a Canadian couple to cross an ocean to teach the Italian people about the Rock of Ages.

Mauro Girgenti was 14 years old, when his family left Italy and moved to Canada. Having grown up in religiosity, he never understood the power of God's Word. When he was 17, Mauro became born again and filled with the Holy Spirit during the Catholic Charismatic Movement. He felt a call of God. As a Catholic, you went to seminary and expressed your call as a priest. While there, someone smuggled in The Believer's Authority by Kenneth E. Hagin.

"[That book] absolutely changed my whole life," shares Mauro. "It defined the rest of my life and my call into ministry."

Hungry for more, Mauro left the seminary and attended a Bible school in Toronto that was founded by Rhema graduates. During this time, he met and married his wife, Connie. After graduating from Bible school, Mauro was an assistant pastor at a church in Mississauga, Ontario. In December 1982, he and Connie started a church in Toronto and began attending Campmeeting every year.

The Girgentis saw a need to get the truths they were learning out to those who spoke Italian. They began translating books from Faith Library Publications into their native tongue, starting with the minibook The New Birth. To date, they have translated 55 books in Italian.

During this time, Mauro began taking short-term missions trips to Italy. While in Palermo in February 1994, he had a divine visitation where the Lord revealed the next phase of ministry: His time in Toronto was over. He and Connie were to move to Italy and start a work there.

The Girgentis turned their church over to the assistant pastor and in September 1994 moved to Italy as missionaries.

When the Girgentis arrived in Italy, a big harvest field awaited them. Their goal was to proclaim the Good News of Jesus Christ. They wanted to help people understand that salvation is a free gift, not something based on works or merit.

To accomplish this, Mauro and Connie started a church in Verona, the third largest city in northeastern Italy. Parola di Vita, which means Word of Life, began as a Bible study in their home with six people. Week after week people kept coming and attendance has been steadily growing. The Girgentis are currently renting a building that accommodates their growing church family.

During a service, one of the top drug dealers in Verona gave his life to Christ and was radically changed. He was also miraculously delivered from cocaine and experienced no withdrawals. At the time, he was in his 30s. Today, 15 years later, he is still serving God and is one of the head ushers at Parola di Vita.

In late 2016, Mauro and Connie held a youth concert and 200 young people from different churches in Verona attended. Many had powerful encounters with God.

A local religious leader showed up during the concert. He was flabbergasted when he witnessed the youth worshipping God. "How did you fill up the building with 200 young people?" he asked. He had never seen anything like this. That night, however, he saw God's transforming power in action.

In 1999, the Girgentis started Rhema Italy in Verona. The school's purpose is to train men and women to fulfill God's call on their lives and to be a light for Jesus in Italy.

Rhema Italy now has three locations. In addition to Verona, there are campuses in Comiso and Pachino, both on the island of Sicily.

Over 500 students have graduated from Rhema Italy. Each person was once entrenched into religiosity, but now they are experiencing true freedom in Christ. Their lives have been transformed by the truth of God's Word.

The graduates are putting their hands to the plow and are impacting Italy for Christ. One couple in Sicily hit the ground running. After completing their studies, they have planted four churches in Sicily. They are teaching the message of faith and helping believers discover and fulfill God's plans for their lives.

When Mauro and Connie see people hurting, they reach out to bring hope and encouragement through Christ. When refugees began fleeing war, violence, and poverty in Northern Africa, one of the places they escaped to was Italy. They hope for a better life and future. The Italian Navy often has to rescue the refugees. Once in the Navy's care, the refugees are briefly checked for medical issues, given something to drink, and released. Unfortunately, many end up on the streets.

The Girgentis and one of their churches in Sicily have jumped in to help. They are supplying the refugees with blankets and helping them to integrate into European life.

Mauro developed a relationship with one of the government centers that help the refugees. He wanted to bring some of the refugees to his church to honor and bless them. The agency was surprised at his plan and wanted to know if there was a catch. There were no strings attached. The Girgentis and their church of 200 simply wanted to share the love of God.

The church was able to help 10 refugees and put together huge baskets for them. Each person received a sleeping bag along with personal hygiene items, clothing, shoes, and panettone, or Italian sweet bread.

The traumatized refugees were not used to receiving such lavish gifts. One refugee expressed his gratitude by singing an African spiritual hymn about Jesus in his native tongue. The Girgentis plan to do more work with the refugees as the Lord directs.

The Girgentis are honored to have spent the past 23 years in Italy. "One of our proudest accomplishments," says Connie, "is getting the Faith Library Publications literature into the hands of the Italians. With the translated books they are learning to confess the Word for themselves and are developing a strong personal relationship with Jesus, declaring "I know Him!"

Mauro and Connie have much work to do in reaching all of Italy. There are still many men and women, young and old who don't know the Lord. Looking ahead, their goal is to continue raising up Italian pastors and establishing churches until every major city in Italy hears the Gospel. By discipling believers, they can accomplish more and reach more for Christ.

CLEAR DIRECTION for the future

Direction for the MINISTRY WITH THE REFUGEES

TO LEARN MORE about Mauro and Connie Girgenti, go to goodnewsint.org.