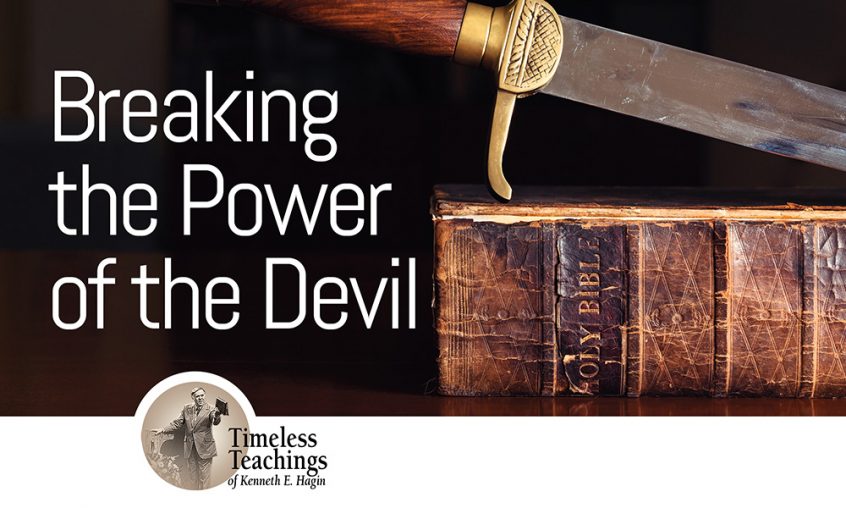 THE WORD OF GOD teaches us that evil spirits are fallen angels that have been dethroned by Jesus Christ. Our contact with demons should be with the knowledge that Jesus defeated them (Col. 2:15). Therefore, we can reign over them.

God made the earth and everything in it. He then gave Adam dominion over all the works of His hands. In other words, Adam was the god of this world until he committed high treason against God and sold out to Satan. Adam didn't have the moral right to commit treason, but he had the legal right to do so.

Colossians 1:12–13 says, "Giving thanks unto the Father . . . Who hath delivered us from the power of darkness, and hath translated us into the kingdom of his dear Son." This is why Satan doesn't have the right to rule or dominate Christians. Yet the average believer has more faith in Satan's authority and power than in God's! All that Jesus did, He did for you and me. The trouble is that believers relegate everything to the future!

It's now—when there is something that will hurt and destroy—that we have authority. But many Christians think we can't have much of anything now. They think Satan's running everything down here. We must remember that although we are in the world, we are not of the world. Satan is running a lot of what is on earth, but he's not running the Church. He's not dominating us. We can dominate him. We have authority over him!

Jesus said, "Behold, I give unto you power to tread on serpents and scorpions, and over all the power of the enemy: and nothing [nothing, nothing, nothing] shall by any means hurt you" (Luke 10:19).

We need to build these truths in our lives by meditating on them until they become a part of our consciousness. All the authority that can be exercised on the earth has to be exercised through the Church. All too often, we have prayed, "Lord, You do this and that." Many believers want to leave everything up to Jesus. But He has conferred His authority on the earth to His Body, the Church.

This became real to me years ago when I began to understand the authority we have. While praying for my older brother's salvation, in my spirit I heard the Lord challenge me. He said, "You do something about it!"

I had been praying for Dub's salvation for years. In spite of my prayers, he seemed to get worse instead of better. After the Lord showed me that I had authority, I said, "In the Name of Jesus, I break the power of the devil over my brother's life, and I claim his salvation!"

I gave the order. I didn't keep saying it or praying it. When a king gives an order, he knows it's going to be carried out. The devil tried to tell me my brother would never be saved. I said, "I don't think he'll be saved—I know it! I took the Name of Jesus and broke your power over him and claimed his deliverance and salvation." I went on my way and within ten days, my brother was saved!

How to Deal With the Devil

As long as Satan can keep you in unbelief or hold you in the arena of reason, he'll whip you in every battle. But if you'll hold him in the arena of faith and the Spirit, you'll whip him every time. The devil won't argue with you about the Name of Jesus—he's afraid of that Name.

Once you use your authority and speak in faith, you don't have to command devils to come out all day long. If you know your authority, they will obey you. They have to go once the command is given in faith.

Faith is involved when exercising spiritual authority. There are times when evil spirits come out immediately. But if they don't, you don't need to get disturbed about it.

Some people's faith is based on a manifestation, not the Bible. They operate outside faith in the sense realm. If they get certain manifestations, they think the devil's gone. But he isn't gone just because you get a manifestation. He's still there, and you need to know that and exercise your authority.

When circumstances don't change immediately, some people become discouraged. They start talking unbelief and defeat themselves. They give the devil dominion over them. Don't be moved by what you see and feel. Stand your ground.

In our battle against the enemy and his forces, know that Jesus has conquered them. We're above them and have authority over them. Our job is to enforce Christ's victory. His victory belongs to us, but we are to carry it out.

God made Christ to be the Head over all things to the Church. It is for our sake that He's the Head. This is so that we would exercise our authority over all things through Him. When we understand what belongs to us, we will enjoy the victory Christ has for us. Satan will fight to keep us from getting there, but through stubborn faith in Christ, the victory can be ours.

In a financial bind? Go to bit.do /authority_finance and learn how you can exercise your spiritual authority in the area of finances.

[Editor's Note: This article was adapted from The Believer's Authority: Legacy Edition by Kenneth E. Hagin.]

4 Comments on “Breaking the Power of the Devil”