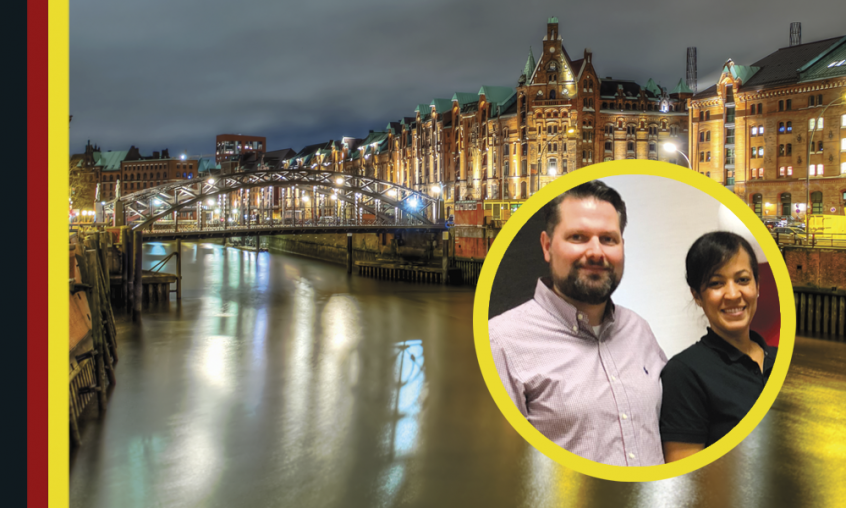 Shortly after becoming born again in the early ’80s, Michael Tamme’s mother found Kenneth E. Hagin’s book I Believe in Visions on her bookshelf. Someone had placed it there unbeknownst to her. When she picked it up, the Holy Spirit said, “One day your whole family will go there.”

Almost a decade later, the Tamme family moved from Germany to Tulsa, Oklahoma. Michael’s parents graduated from Rhema USA in 1993.

Although 18-year-old Michael knew God called him to the ministry, he ran from it. He joined the military when his family returned to Germany. After completing a year of mandatory service, Michael eagerly began a career in the German Army as an Airborne Ranger. However, he sensed his time in the military was about to end.

Michael came to Winter Bible Seminar in 1997, wanting to receive direction from God. One night after praying for international ministers, Kenneth E. Hagin stopped. “The Lord arrested me,” he said. “I want everyone else who is international to come down here.”

Michael went forward, apprehensive but expectant. He didn’t know that what was coming next would change the trajectory of his life. As Brother Hagin laid hands on one person in the middle, the rest fell like dominos.

“Being the last person in the line, I took an extra step back so nobody would fall on me. And BAM, the holy power of God pulled me to the floor,” Michael recalls. While lying there, the Lord confirmed that he was to give up his military career, go to Rhema, and follow Him 100 percent. After leaving the Reserves, Michael returned to Broken Arrow to attend school.

Kandra admits that moving from Las Vegas to Broken Arrow was a culture shock. After graduating second year, she wanted to return to Nevada.

During Kandra’s second and third year, she was a member of Rhema’s women’s basketball team.* Coach Perry Shockley persuaded her to stick around for a third year. She credits him for instilling in her a “never give up” attitude. During Kandra’s third year, she and Michael met and began dating. After graduating in 2000, they were married in Las Vegas.

Full of faith in God and peace in their hearts, Michael and Kandra moved to Germany after their wedding. Michael’s parents had started Lebendiges Wort Internationales Christliches Glaubenszentrum (Living Word Int’l. Christian Center) in 1999. Michael and Kandra became their assistant pastors.

Although the Tammes were content in the church, they believed God had more. “My dad, Kandra, and I had it on our hearts to start a Rhema campus,” says Michael.

Apparently, it was on God’s heart too! The Lord had long been orchestrating the establishment of Rhema Hamburg, partly through the prayers of one woman. After discovering the faith message and Kenneth E. Hagin books, she began a word of faith church.

“[People] didn’t accept her because she was a woman,” says Michael. “But she stuck with it and prayed: ‘God, send a Bible school like [Rhema] to our city.’ She took a lot of arrows for the faith message. I believe the campus came into existence because of her.”

Rhema Hamburg was launched in 2012. The student body includes men and women from over 20 churches and various denominations. Besides Germany, students hail from India, Africa, Asia, the Middle East, and Europe, with over 27 languages spoken between them.

As campus coordinators of Rhema Hamburg, the Tammes oversee campus logistics, communicate with the students, and ensure the curriculum stays within Rhema’s guidelines. As instructors, Michael and Kandra see firsthand how the Word transforms students’ lives.

“Only the local church can really reach and change a nation.”Michael Tamme

One person whose life was changed is Katharina. Feeling empty and stagnant in her relationship with God, she wanted to attend a Bible school and asked God to show her the right one. At that same time, Katharina was diagnosed with stage 3 cancer. With death knocking at her door, she didn’t understand why she had such a strong desire to go to Bible school.

Two months after beginning radiation, Katharina’s church started holding midweek lessons on faith. She attended the sessions and loved what she heard. The guest teachers were from Rhema Germany. After listening to them, Katharina knew Rhema was the Bible school for her.

“Resist the devil, and he shall flee from you” rose up from her heart!

Later that day, the director of Rhema Germany shared how a student was healed of a serious heart condition while sitting in class. That was the confirmation Katharina needed. Her mind was made up; she was going to Rhema! After undergoing more tests, the results came back good. Everything was okay!

Despite challenges early on, Katharina finished her first year strong. Today she is thriving physically, emotionally, and spiritually.

“These students have never heard this. It’s a whole new way of thinking,” says Kandra. “You see them come to class, and they’re clueless. When I see the light go on, I can cry!”

Shortly after settling into their roles at Rhema Hamburg, Michael’s parents asked the pair to become the senior pastors of Lebendiges Wort. The Tammes concede that it has been a “juggle,” but they are more than up for the task. “What God has for us to do is so much bigger than ourselves,” says Kandra.

Hamburg, known as the city of bridges, is the second largest municipality in Germany. Like many European cities, most of Hamburg is “unchurched.” The Tammes are “building bridges” to change that.

“Through the love of God, new bridges are being built into churches that are ethnically secluded,” says Michael. The couple is also working to bridge the gap between denominations by developing connections with other pastors.

The Tammes want to see the message of faith taught to all God’s people. One way they plan to do that is to help establish churches.

“Only the local church can really reach and change a nation,” says Michael. “We’re here to help strengthen the local church. The goal is to get people to pioneer more churches.”

“As the students get the word of faith,” Kandra adds, “they will take it back and establish those churches. Then they train, coach, and multiply. It keeps going.” The vision is not only for Germany but for other nations too.

The spiritual atmosphere has changed since Michael and Kandra arrived almost 20 years ago. But they both agree much work needs to be done. “We want to equip and train people the same way Rhema has trained and equipped us,” says Kandra. “The Word is too good to keep for yourself. You gotta give it away.”

*The Lady Crusaders women’s basketball team started in the ’98–’99 school year. They won the 1999 and 2000 NBCAA National Championships. In 2001, the team’s name was changed to the Lady Eagles.

To learn more about Michael and Kandra Tamme visit, lwhh.de.