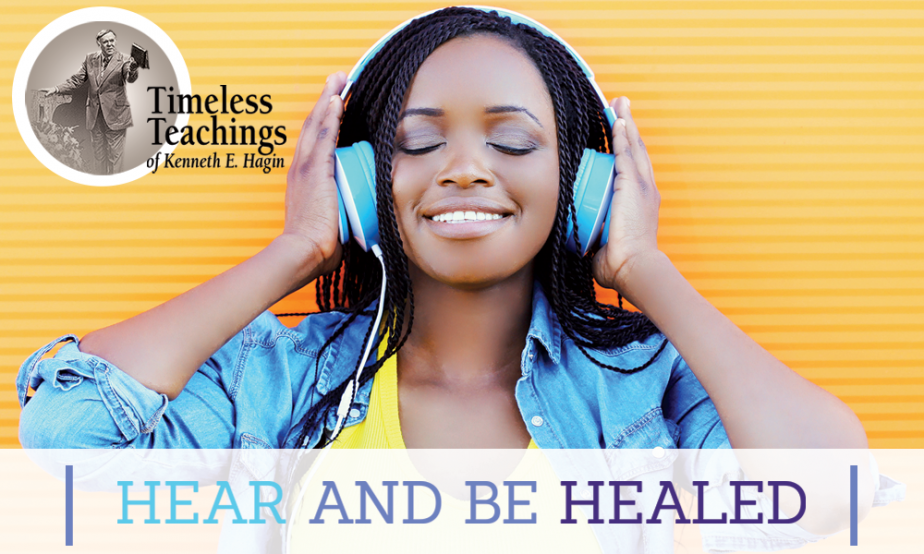 But so much the more went there a fame abroad of him: and great multitudes came together to hear, and to be healed by him of their infirmities.
—LUKE 5:15

EACH WEEKDAY on the Rhema Bible Training College campus, Healing School services are conducted. One day as I was on my way into the auditorium to begin the afternoon Healing School service, something—actually an unseen Someone—said to me, "Hear and be healed." I didn't pay much attention; I went ahead and conducted the service. But the next afternoon, in the same place, I again heard the words, "Hear and be healed."

On the third day, as I was ready to enter the auditorium, that same voice said, "Hear and be healed." I wrote that down and later asked myself, "Is the Holy Spirit saying something to me? Is there something in the Bible about hearing and being healed?"

Why didn't more people in Nazareth, Jesus' hometown, get healed? Only a few sick people were healed of minor ailments, yet we know there were more sick people than that present. In Nazareth, the people were not healed because they wouldn't hear. One account of Jesus' ministry at Nazareth is found in Mark 6:5: "And he could there do no mighty work, save that he laid his hands upon a few sick folk, and healed them." The Amplified Bible[Classic Edition] says Jesus laid His hands on "a few sickly people." Another translation reads, "He laid his hands on a few folks with minor ailments."

Luke 5:15 tells us that the great multitudes "came together to hear"—a multitude in this city, a multitude in that city, a multitude in another city. Luke just lumps all these multitudes together. They came to hear. What they heard must have had to do with healing, because it says they came to hear and be healed, doesn't it? What did they hear? They heard Jesus read from the prophet Isaiah. These were Jews (Jesus never preached outside of His own country), and they knew the Old Testament. They heard Jesus take His text from Isaiah and say, "This Scripture is fulfilled in your hearing. The Spirit of the Lord is upon Me. I am anointed to minister."

Luke 6:17 tells us that a great multitude of people came "to hear Him, and to be healed of their diseases."

There is something very interesting in the next verse: "And they that were vexed with unclean spirits: and they were HEALED" (vs. 18). "I thought you had to cast spirits out," some will say. Sometimes you do, but not always. Those who were vexed with unclean spirits were healed, the verse says. You see, the same power that will heal people of sickness will deliver them of demons!

Now notice the next verse: "And the whole multitude sought to touch him: for there went virtue [power] out of him [the Greek word is dunamis], and healed them all."

Why did the multitude want to touch Jesus? They couldn't see any power go out of Him. You can't see the power of God—you can only see the reaction to it. How did they know that power went out of Jesus? Because of what they heard! They heard Jesus read from the Book of Isaiah, "The Spirit of the Lord is upon me, because he hath anointed me to preach . . . [and] to heal. . . . This day is this scripture fulfilled in your ears" (Luke 4:18, 21).

Now turn back with me to the Book of Matthew.

MATTHEW 14:34–36
34 And when they were gone over [the Sea of Galilee], they came into the land of Gennesaret.
35 And when the men of that place had knowledge of him, they sent out into all that country round about, and brought unto him all that were diseased;
36 And besought him that they might only touch the hem of his garment: and as many as touched were made perfectly whole.

The same thing happened here in the land of Gennesaret that we read about in the sixth chapter of Luke: The people heard and were healed. These verses in Matthew chapter 14 don't talk about the power of God being manifested, but you can see that it is inferred. Notice that they did not bring the sick to Jesus until they first had knowledge of Jesus. How did they gain knowledge of Jesus? By seeing Him heal somebody? No, Jesus hadn't healed anyone yet in their country. They gained knowledge of Him by hearing. They heard something!

I wonder what they heard? It had to be something in connection with sickness, because as soon as they had knowledge of Jesus, they gathered up the sick and the diseased and brought them to Him. They must have heard Jesus read from Isaiah, "The Spirit of the Lord is upon me, because he hath anointed me to preach . . . [and] to heal. . . . This day is this scripture fulfilled in your ears."

God can heal through special manifestations of the Spirit. But when He doesn't initiate something, you can give people His Word. I remember one case of a woman given up to die with cancer. Her doctors had done all they could. In this instance, the Holy Spirit didn't tell me to do anything. So what are you going to do? Bless God, I just sat down by the bed and opened the Word to her. I began to teach her. It took me a little time, but by hearing the Word she was perfectly healed of terminal cancer. The same doctors who gave her only 10 days to live couldn't find a trace of the cancer and pronounced her well. Thank God for manifestations of the Spirit. But when they don't come, if you can get people to hear the Word, you can still get them healed.

[Editor's Note: This article was adapted from Kenneth E. Hagin's minibook Hear and Be Healed.]

Have you heard a message on healing and been healed? Tell us on social media. Use #RhemaWOF.