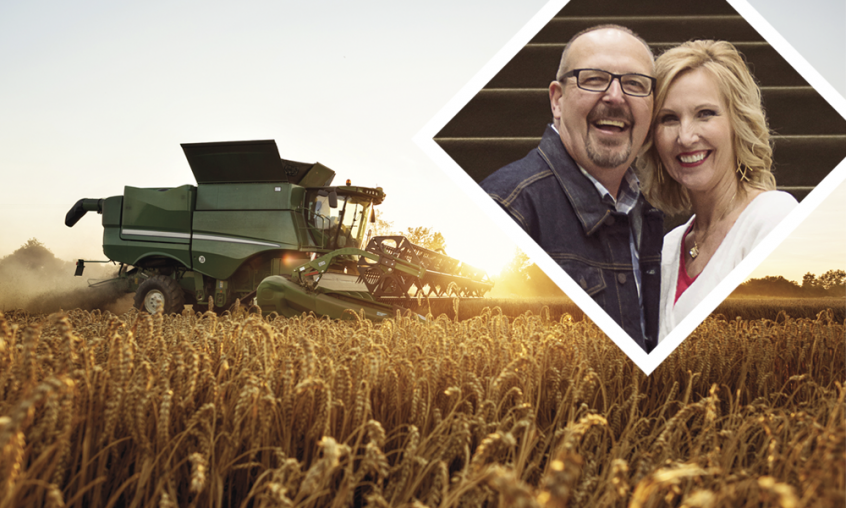 I have never been in a church that had a revelation of the Great Commission,” the guest speaker said to Pastor Loren Hirschy (’80, ’81) years ago. When the evangelist spoke those words, Loren’s lips and tongue began to burn, and he had a vision.

Loren saw a two-story white wood farmhouse—one that typically dots the Midwestern landscape. A large group of people was standing on the lawn as if they were waiting for something.
Tractor-trailers pulled into the driveway. “The harvest crew is arriving from the manufacturer delivering harvesting equipment,” the Lord said.

God showed Loren that the people on the lawn were newly hired factory representatives. They would gather in the harvest and train others in harvesting. Then the people they instructed would deliver equipment to others and teach them. This scenario would go on and on.

Loren came to understand that the vision had a two-fold meaning. It revealed God’s plan for the Great Commission, and it showed God’s heart for Word of Life Church.

For over 30 years, Loren (an RMAI Upper Midwest Regional Director) and his wife, Joy, have pastored Word of Life, in Dubuque, Iowa. It’s a thriving spirit-filled church full of God’s power and love. Around the 20-year mark, Loren realized the congregation was getting older. If something didn’t change, they would start going home to be with the Lord, and the church would no longer be here. “It struck me,” recalls Loren. “We have to reach out to young families.”

The Hirschys and their staff intentionally approached a younger generation and embraced what they refer to as a culture of compelling invitation. “Jesus told us to go into the harvest field—into the highways and byways and compel people to come in,” explains Loren.

Word of Life went through a significant transformation. Every area of ministry had changes made to it. The church board was restructured to include people of all ages, the building was remodeled, and the children’s ministry was made a priority. “We made sure we had a great kids’ area,” says Joy. “We’re involving the young people. Helping them bridge into serving and then they have ownership where they feel like this is [their] church too.”

“Compared to helping people find and fulfill what God’s plan is for their lives, nothing else matters.”Loren Hirschy

Word of Life has opened its doors and heart to the unchurched, without compromising the integrity of the Word. Each week new people come, and many receive Jesus.

One such person was Erin, a young girl in her 20s. She was an atheist who sporadically attended the youth group. One evening, while Loren was on Facebook, he noticed Erin’s name pop up and
began a conversation with her. After messaging back and forth, Loren invited her to church. She accepted the invitation.

When Erin came, the pains of her rough, troubled past were washed away. She was born again, healed, and delivered. Soon after, she enrolled in Bible school. Erin now is a leader in the children’s ministry.

Joy and Loren wanted to partner with their community. That prompted Word of Life to take this ministry concept outside its four-walls as a way to engage and meet needs in the towns where they have churches.

During the Christmas season, Word of Life takes a special offering called “The Difference Maker.” And what a difference it has made! The past two years, they purchased camera equipment and StrongArm Jaws of Life equipment for the Dubuque fire department. They also bought body armor for the fire department in Platteville, Wisconsin. “It’s a cool way the Lord has led us to reach out,” says Joy.

In 2016, Loren traveled to Africa to minister at Rhema Kenya. While there, the Lord instructed him to build the kingdom by starting churches. Since then, Word of Life has become a church that plants churches. Their first church plant in the small college town of Platteville, Wisconsin, soft launched on December 30, 2018. The new outreach quickly made an impact.

A woman who lived across the street noticed people going into the building. Out of curiosity, she went to see what was happening. Once inside, she stayed for the entire service. The woman kept visiting, gave her life to Christ, and sent the church a nice letter about what a difference it was making in her life. The Platteville location celebrated its grand opening on April 7, 2019, and is well on its way to having a significant presence in the community.

As God leads, the Hirschys will plant more churches. “[Word of Life] is like a wheel,” says Loren. “We are the hub in the center and spokes are going out. We’re looking at other communities in a circle around us.”

“Being an agricultural state, the towns are small,” adds Joy. “People have to sometimes drive a long way to go to church. Some of them just won’t. You have to go to them. Get closer to them. We’re looking to do that.”

One month Loren taught a series called Come Home. It was based on the story of the prodigal son. To illustrate the part in the story where the father sees his son at a distance and runs to hug him, Loren ran down the aisle randomly giving out hugs. Afterward, a man named Steve came to him and said, “Pastor, God did it again! He healed me! I could not raise my arm above this high. Now look!” Steve lifted his arm high over his head. “When you hugged me, something happened!”

Loren’s favorite part about being a pastor is seeing someone’s life being blessed and watching hope come into their hearts. He loves seeing them get answers and their families get better. It brings joy to his heart when they move into what they were created for. Jeremy was working at a dead-end job. After listening to a message on having a vision, he went back to school and earned his bachelor’s degree in accounting. “He has a different career and future,” exclaims Loren. “Just because of the word he heard in a Sunday morning message!”

Thinking back to his high school years, Loren remembers a teacher asking the class, “How many of you know what you want to do when you graduate?” Loren remembers thinking, “Compared to helping people find and fulfill what God’s plan is for their lives, nothing else matters.”

The Lord later directed Loren to prepare for ministry at Rhema Bible Training College. “What we learned at Rhema has equipped us well,” says Loren. “What Rhema put into us is without compare.”

Joy adds, “Everything Brother Hagin spoke went straight into me like I was a dry sponge. It changed everything about our lives.”

With that foundation intact, the Hirschys are forever committed to changing lives. They are determined to help people fulfill their divine destiny. And they are training harvesters to reach the lost and making a difference one life at a time.

For God to send or raise up quality people for leadership positions at the Word of Life campuses in Iowa, Wisconsin, and future church plants

To learn more about Loren and Joy Hirschy visit, mywordoflife.church.

Word of Life Church has opened its doors and heart to the unchurched, without compromising the integrity of the word.