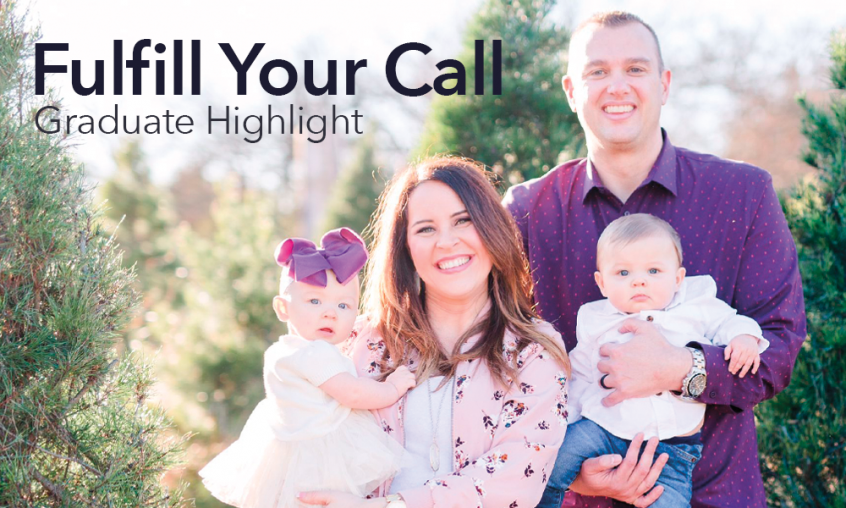 DO YOU SENSE the call of God on your life but aren't sure where to start? Chad Stewart, a 2008 RBTC USA graduate and pastor of Word of Life in Sand Springs, Oklahoma, uses the life of Joseph to help you fulfill that call: 1) Be faithful; 2) Stay faithful; and 3) Don't forget family. Find out how faithfulness and family impacted Chad's life.

church in Kansas City, Missouri. Standing in the middle of a field, he cried out to God, "Why did You lead me here in the desert to die?"

He laughs now, but he was learning faithfulness then. He wanted to quit his grounds keeping job, but the Holy Spirit urged him to stay. When an opportunity came to manage the landscaping company, he reluctantly took it. But then he had an idea, and the business went from mom-and-pop mowing to commercial accounts throughout the city.

Little did Chad know that his faithfulness would open a door for him when he later attended Rhema Bible Training College. His experience qualified him to step into a grounds supervisor position at Kenneth Hagin Ministries. He was able to attend school, work for the ministry, and ultimately become connected to the spiritual family that would be crucial to his future calling.

When Chad attended RBTC, he played for the Eagles basketball team. After a game, he and Rev. Kenneth W. Hagin met in an unlikely place: the men's restroom. "It was a special moment in my life!" Chad recalls. "I had been divorced and wanted to go back into ministry. Pastor Hagin encouraged me and told me that God still had a plan for me."

During Rhema Bible Church's Harvest Carnival outreach, Rev. Hagin came by the booth where Chad was volunteering and asked how things were going. Chad confessed that he was sore from basketball practice. Rev. Hagin got down on the floor and began doing stretches. "This is what you need to do." When Chad just stood there, he exclaimed, "Well, get down here!" That night, Chad got to know him as "Dad" Hagin as they stretched among the thousands of people attending the event.

"Pastor Hagin invested in me. That's why I am preaching today. He took time in a bathroom to speak to me. He got down on the floor and did something my own father never did. He played and continues to play that part in my life."

Years later, Chad and his wife, Sarah (a third-year '07 RBTC USA graduate and former Lady Eagles basketball player), became senior pastors of a church after the founding pastor passed away. "I don't know what I would have done without my Rhema family," Chad shares. "I can't tell you the times I called and said, 'I'm stuck! What would you do?' "

From former instructors to "Dad" Hagin, no question went unanswered. The support was crucial not only to the Stewarts but also to the people they are called to serve.

What is your calling? What steps are you taking to pursue it? Rhema Bible Training College will not only train you, but like family, they are also there to support you long after your classes are over.

Called by God. Now what?

Based on the life of Joseph (Genesis 37–50), here are three keys to fulfilling the call of God.