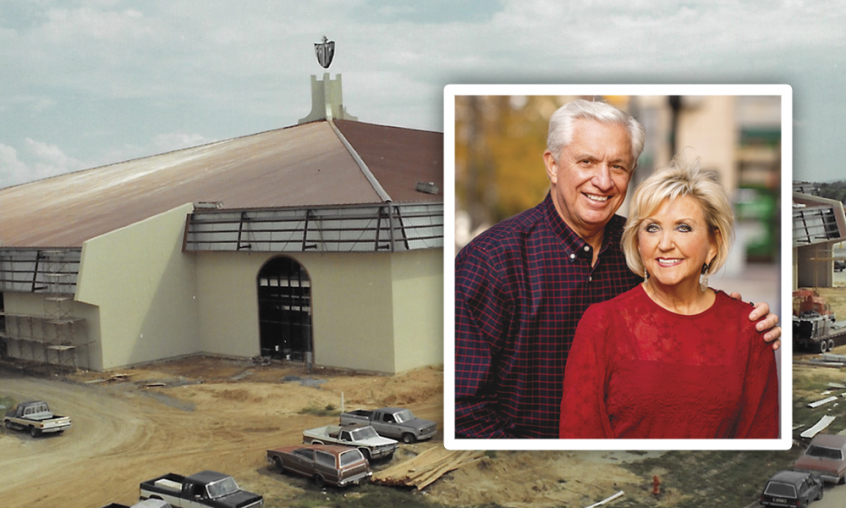 THE SUMMER OF ’87 slipped into the gentle relief of a North Carolina August, and the Daniels family slipped away to Florida. Charlie and Sally had just announced an impromptu vacation. Excited young voices filled the back seat, anticipating adventure. But what the children didn’t expect was the biggest adventure of all—they weren’t coming back.

Charlie Daniels was not voted “most likely to succeed” by his classmates. But he proved them wrong. He married his high school sweetheart, Sally, and they grew a thriving company from the ground up with no formal education. Charlie was a builder, and their business held multiple properties and streams of income. They had a beautiful family, and everything they owned was paid for. Their financial life looked like a miracle for two young adults. Yet they felt empty.

But God was dealing with Charlie. “I never really turned my heart over to the Lord,” he recalls. “But one day, I was desperate and decided that I would serve God. I found a church I had never been in before, walked in, knelt down, and gave my life back to Christ.”

Two days later, Charlie sensed the Lord’s voice, “Go to Florida.” He didn’t know exactly where or why, but somehow he knew they were moving. The following morning, he and Sally woke early, gathered the kids, and drove away. They left everything behind—cars in the garage, furniture in the house—everything they had worked so hard to build.

The Daniels landed in Lakeland where Sally’s cousin pastored a church. “You really need to hear Brother Hagin,” the pastor told Charlie. “He will put everything you believe into words.”

The opportunity came when Kenneth E. Hagin held a meeting in Miami. As Charlie listened, he thought, “I have to go to Tulsa!” After the school year ended for his children, the family was on the road again—this time headed to Rhema Bible Training College.

Awaiting in Oklahoma was a plan God designed that hit surprisingly close to home. Charlie’s father was a minister who built or remodeled the churches he pastored. Charlie always had a heart for ministry and knew the importance of buildings. Even though he didn’t feel called to be a pastor, he would bridge the gap and be a builder of churches for pastors.

The Daniels completed first year of RBTC in 1989 and stayed another year for the pastoral ministry class, knowing they were called to help ministers. Charlie and Sally graduated from RBTC in 1990. Little did they realize, the first pastor they would help would be their own—Pastor Kenneth W. Hagin.

In the meantime, their financial life took an unexpected turn. They lost everything, and for the first time in years, they were heavily in debt. Charlie was anxious to get out and go make money! But instead of a temporary Bible college immersion, Rhema turned into 14 more years of on-the-job training with the simple question: “Will you help build Rhema Bible Church?”

Charlie’s yes put him in place. God was about to reveal a new model for construction, and the Daniels family would become debt free by God’s Word.

He got serious, “I don’t care who it works for—if it doesn’t work for me, it isn’t real!”Charlie Daniels

Immediately after graduation, Charlie began working with the architect on Rhema Bible Church. They were both on staff and serving Pastor Hagin. For the first time, Charlie wasn’t placed in the traditional adversarial scenario.

Usually builders got involved after architectural plans were drawn, and navigating the build was often a battle. This affected ministries—the pastor was forced to play referee and make design or construction decisions, usually driven by skyrocketing costs.

But while building RBC, the builder and architect worked together from the beginning with a mindset to serve the pastor. It was revolutionary! The quality, savings, working relationships, and protection of the pastor’s calling as a minister became a new model for Charlie. This is what he wanted to help pastors do—stay in the pulpit, do what they are called to do, and navigate the building process while staying financially free.

Charlie often heard Brother Hagin say of adversity, “It’s another opportunity to prove God’s Word works.” One day it clicked: “I’m going to prove God’s Word will get me out of debt!” He got serious, “I don’t care who it works for—if it doesn’t work for me, it isn’t real!”

That night, the Lord took him to the Book of James about his confession.

6 But let him ask in faith, nothing wavering. For he that wavereth is like a wave of the sea driven with the wind and tossed.

7 For let not that man think that he shall receive any thing of the Lord.

8 A double minded man is unstable in all his ways.

God told Charlie, “You are that man, and you will receive nothing.” It was a hard word to hear, but the Lord went on to give Charlie the wisdom he needed, “Write down what you are confessing and don’t change.”

It was another revelation. His words had been changing! Charlie wrote down the amount of money they needed. He and Sally kept it before their eyes. They agreed and confessed. After a year, they made that amount—over and above Charlie’s job at Rhema. The Word worked! They repeated the process and opportunities came. In one year, debt was gone.

When the time came to transition from Rhema to bring this new way of building to more ministries, Charlie had a proven plan—both in personal life and business. God spoke to Sally and said, “It will be as easy as walking from the tile to the carpet.”

After turning in his resignation, Charlie didn’t have to go far from home or relocate his family to follow God. Beginning in Tulsa, he helped other churches grow, then expanded across the nation. He was often told it was because he “built Rhema” that he was building for others. But in truth, it started long before. Charlie found success by faithfully answering God’s call.

Looking back, his business developed just as God said it would—no steps to climb, just an easy transition. The hard but miraculous path was a proving ground for Charlie and Sally to learn how to be debt free God’s way. Now they help others do the same. As a result, Churches by Daniels is more than a construction company. It is a design-build team with a calling and passion for keeping ministers financially free while they “build and prosper” (Ezra 6:14).

Visit churchesbydaniels.com to view their portfolio of award-winning facilities.