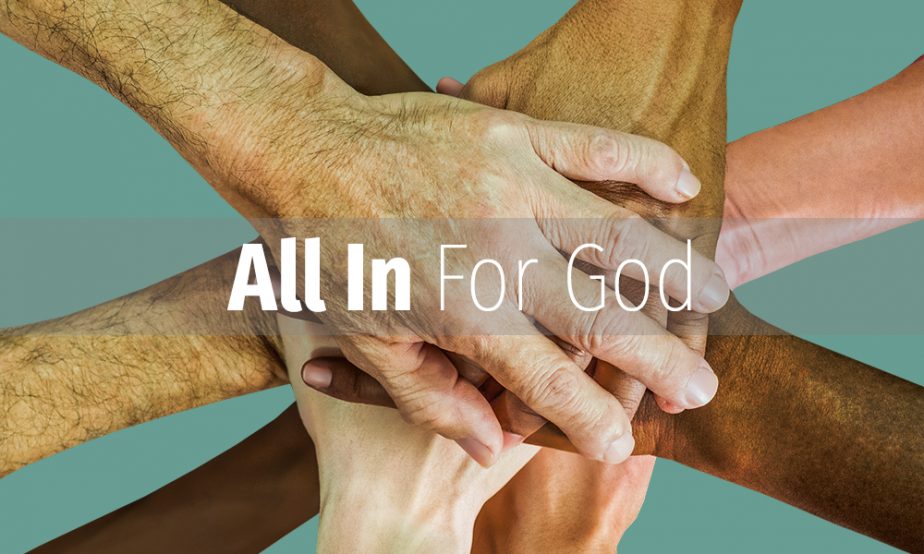 BEING “ALL IN” means different things to different people. When I think about being all in, I think of football fans.

Some of the craziest people I know are football fans who are seriously all in for their teams. Have you ever seen them? They’re the ones in the camera shots screaming—with their shirts off and their team’s colors painted all over their bodies. They don’t care what anybody thinks of them as they make fools of themselves.

In the Bible we learn about three individuals who were all in for God. In the Book of Daniel we see the story of three young Hebrews—Shadrach, Meshach, and Abednego. They lived in Babylon, a rich and prosperous city, but one with practices against the ways of God. These three men were officials in the court of King Nebuchadnezzar, but they feared God and served Him.

One day, King Nebuchadnezzar built a 90-foot-tall statue made of gold. He wanted the people to worship it. The King gathered a huge band of musicians. At the sound of the music, everyone in Babylon was to fall down and worship the gold statue. If they didn’t bow down and worship the statue, they would be thrown in a fiery furnace.

The first time the music played, everybody fell and worshipped the idol except Shadrach, Meshach, and Abednego. It was immediately reported to King Nebuchadnezzar that the three Hebrew young men refused to do as he commanded. The king was furious. He called them up front and gave them one more chance to bow down to the statue or be thrown into the furnace. These three young men answered the king this way.

16 Your threat means nothing to us.
17 If you throw us in the fire, the God we serve can rescue us from your roaring furnace and anything else you might cook up, O king.
18 But even if he doesn’t, it wouldn’t make a bit of difference, O king. We still wouldn’t serve your gods or worship the gold statue you set up.

Living for God, though, is more important than these things. Jesus needs us to be a light to the world around us.Denise Burns

That certainly didn’t go over well with the king. He immediately had them thrown into a hot furnace. And God saved them. They walked out of the furnace not even smelling like smoke! God saved them because they put their trust in Him.

Here’s what we need to learn from Shadrach, Meshach, and Abednego. These three Hebrew young men faced death, but they chose to be “all in.” Their faith said, “God can save us.” But their commitment said, “Even if He doesn’t, we’re still not going to bow down.” They chose not to give in to peer pressure or fear.

Peer pressure can keep us from being all in. It can be pressure from friends to do things that go against God’s Word. It can be the pressure that “everybody’s doing it” or the fear of losing friends if we don’t do it. These thoughts and emotions come against all of us. They try to get us to leave our commitment to Christ.

Living for God, though, is more important than these things. Jesus needs us to be a light to the world around us. He needs us to show others what it means to live a Christian life—to be a Christ follower. He wants us to tell others about Him.