The Apostle Paul told us, “Fight the good fight of faith” (1 Tim. 6:12). The only fight Christians are called upon to fight is the faith fight. If we are in any other kind of fight, we are in the wrong fight. We need to get out of the wrong fight and get into the right one.

Some Christians say, “I’m going to fight the devil.” There’s no need to do that! Jesus already defeated him for you. And you wouldn’t be any match for him anyway.

Others say, “I’m going to fight sin.” There’s no need to do that either because Jesus is the cure for sin. According to Hebrews 9:26, He put away sin by the sacrifice of Himself. So there really isn’t a sin problem; there’s a sinner problem. And when you get the sinner to Jesus, the sin problem is taken care of.

There are enemies in this fight of faith that we are instructed to fight. If there were no enemies or hindrances to faith, there would be no fight to it.

One hindrance that holds many people in bondage is a lack of understanding of how to act on God’s Word.

Some Christians try to believe, and it is such a struggle for them. They say they’re trying to have faith. But all that’s necessary is to act on what God says in His Word. If we know God’s Word is true and act on it, it becomes a reality in our lives.

Real faith is a product of the knowledge of God’s Word. Isn’t that what Romans 10:17 says? “Faith cometh by hearing, and hearing by the word of God.”

If we know God’s Word is true and act on it, it becomes a reality in our lives.

Many times we unknowingly substitute “mental assent” or “mental agreement” for faith. For instance, we mentally agree that God’s Word is true. We think we believe and that we are in faith—but we’re not.

For example, you can say that the resurrection is a great doctrine. But it will mean nothing to you until you believe in your heart and say with your mouth, “Jesus died for me. Jesus was raised from the dead for me! He arose victorious over death, hell, and the grave—and He did it all for me! I’m free!”

It’s when you believe the resurrection truth in your heart and confess it with your mouth—when you act on it—that the Word becomes something more than a doctrine. It becomes a reality. Remember, the people who get answers from God are those who act on His Word.

When the crises of life come, if you don’t know how to act on God’s Word, you are at a disadvantage.

I pastored for almost 12 years and found that churches have the same problems families have. In one church, as we were discussing problems within the church, the board of deacons asked me, “What are we going to do now?” I just smiled and said, “We’re going to act like the Bible is true.”

And just by my saying that, the deacons sighed in relief because they knew the Bible was true!

I believe the Greater One lives in us. I believe He is greater than the devil. I know the Word says that, so I must act like it is true. When I act like God’s Word is true, it becomes a reality in my life. And that is when the Greater One goes to work for me.

If I act like I must fight the battle, God can’t fight it. If I fight the battle, I am not taking advantage of the Greater One and what He has done for me. Can you see that? So I don’t try to figure out the situation. I just put God’s Word to work for me by acting on it, and the Word fights my battles for me.

All Christians need to do is act on the Word. It’s vital that we learn this simple lesson. It’s not struggling or fretting—it’s acting on what God has said that will bring results in our lives!

How My Brother Got Saved

I prayed for the salvation of my oldest brother, Dub, for more than 15 years. On several occasions, I fasted. But the more I fasted and prayed, the worse he got.

Then I began to see what the Bible says. Prayer and fasting are right. But I wasn’t trusting God to do the work in my brother’s life. I was trying to do it myself. It was as if I were trying to force God into doing something.

So one day I took my authority as a believer. I stood in my bedroom and said, “In the Name of Jesus, I break the power of the devil over Dub’s life. I claim his deliverance from the devil, and I claim his salvation.” Then I left the room singing. I had acted on God’s Word.

Within 10 days, Dub was saved. Someone asked me, “What if it hadn’t worked that fast?” It wouldn’t have bothered me at all. I would have held fast to God’s Word and acted on it. If it had taken 100 years, I would have known Dub would be saved. God’s Word is true!

When the light of God’s Word comes, faith is there.

If we know God’s Word is true and act on it, it becomes a reality in our lives.

[Editor’s Note: This article was adapted from Kenneth E. Hagin’s book Understanding How to Fight the Good Fight of Faith.] 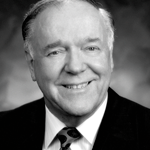