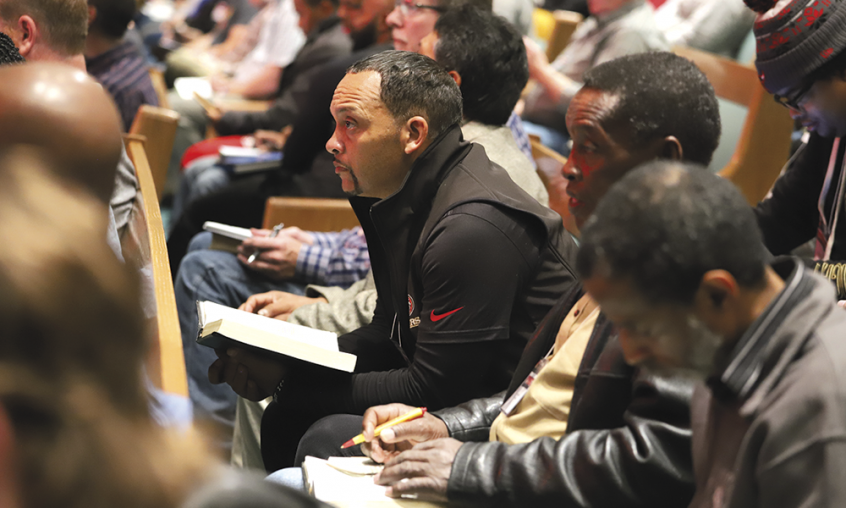 A Call to Arms 2018 Men’s Conference was phenomenal! For three days, men from all walks of life gathered in Broken Arrow, Oklahoma, for a time of impartation, exhortation, worship, and fellowship.

In each session, the attendees learned how to live out their potential in God. They were encouraged to stand for truth, live holy, dream big, never quit, and pursue their God-given vision with passion.

As the conference ended, the men left pumped, motivated, changed, and ready to be all God called them to be in their homes, churches, businesses, and world.

Within every man is a desire to be mighty and powerful in some way. I believe God created us that way. We need mighty men of God at home, in the church, in business, and in our world. These men aren’t afraid, won’t compromise, and won’t yield to sin. They are men who dare to live right and do right. It’s time for the world to see godly men who dream big, accomplish the impossible, resist evil, and rise in victory.

God called Gideon a brave and courageous man (Judges 6:12). While he was hiding and shaking in his boots, God called him a hero, a warrior, and a mighty man of courage. There was no outward evidence that Gideon was anything except afraid. God calls you what you are because He sees your potential and talent to become what He planned for you. God called you His son. He called you powerful. He called you righteous.

Maybe you don’t feel as though you’re a mighty man of anything! But God brought you here to expose the lies of the enemy and help you rise to your potential. Tonight can be a turning point. Forget about the past. Turn your face to the brand-new future and say, “I will become a mighty man of God!”

The Apostle Paul faced many challenges. We see in Second Corinthians 11:23–27 that he was jailed often, whipped many times, and faced death repeatedly. He was beaten with rods three times and stoned once. Paul went through a lot. But in Acts 20:24 he said, “None of these things move me, neither count I my life dear unto myself, so that I might finish my course with joy, and . . . to testify the gospel of the grace of God.”

Life can be tough. Too often, Christians give up and throw in the towel. Jesus came to give us a rich and satisfying life (John 10:10 NLT). We can choose to stick with God’s purpose or give up. But let’s grit our teeth like Paul and refuse to throw in the towel. Let’s allow our tests to become our testimonies.

I’ve been to A Call to Arms three years in a row. It’s an amazing experience! It’s always refreshing, and I hear things straight from Heaven every time I’m back.Brian

“When I lost my arm, I thought my life was over. I was ready to give up. I was depressed and dealt with suicidal thoughts for a long time. God can use your pain and turn it into your purpose. You may be thinking, ‘This is it. I’m done.’ But God can bring you out of your suffering and turn it into a soul-winning ministry. Thousands of people have come to Jesus through my testimony. When it looks as though your story is over, you may want to end it with a period. But God uses a comma.” // Jeff Bardel

“Soul management will make or break you. The moment you start thinking wrongly, it affects what you do. It will take you down paths you don’t ever want to go. People say, ‘It’s impossible—I can’t stop thinking.’ When Scripture says nothing is impossible, it also includes getting your mind under control and not allowing it to control you. Your mind will be a [battleground] for the rest of your life. But the greatest thing is how different your life is when you control your thought life versus leaving it out of control. ” // Mike Cameneti

“God takes pleasure in His sons. He wants you to win. However, to please God, you have to stand in faith. Whatever you’re going through wouldn’t be in your life if you couldn’t whip it! There is an answer. Jesus showed us how to live a life of victory. One way is by speaking what is written in His Word. Many times we pray about something we should be speaking to. If the enemy fills your mind with thoughts of defeat and failure, get an ‘it is written.’ The way you frame the test is how you get through it.” // Roy Coggeshall

“It’s not enough to only get the vision from God; you have a responsibility to see it through to completion. You will never rise up in your man status until you do what God called you to do. Samson had a destiny, but he was driven by sight—Delilah! What ‘Delilahs’ are in your life? What things are keeping you from living by faith? God is saying to be holy and quit living by sight! He has a vision for you bigger than you can imagine. Find the vision and purpose of God, and pursue it with passion.” // Earl Glisson