Has anyone said to you, “Watch your attitude”? Or you may have said to a sibling or to your child, “Straighten up your attitude.” One of the most critical factors in whether one will be successful in life is attitude.

The Cambridge Dictionary defines attitude this way: “A feeling or opinion about something or someone, or a way of behaving that is caused by this.”

Someone has said that attitude, not aptitude, determines your altitude in life. What a difference your attitude makes. I don’t know about you, but I don’t enjoy being around people who have what I call “stinky” attitudes.

It seems that some people always find the negative in every situation. Your thoughts affect your attitude. Proverbs 4:23 (NCV) says, “Be careful what you think, because your thoughts run your life.” Certainly, we are continually faced with many negative situations in life. However, your attitude determines whether you come out victorious in the situation or if it destroys you.

I’m reminded of a story I read. A little boy was overheard talking to himself as he strutted through the backyard wearing his baseball cap and toting a ball and bat. “I’m the greatest hitter in the world,” he announced.

I want to admonish you—ALWAYS KEEP A POSITIVE ATTITUDE!

He tossed the ball into the air, swung at it, and missed. “Strike one,” he yelled.

Undaunted, he picked up the ball and said, “I’m the greatest hitter in the world.” He tossed the ball into the air. When it came down, he swung and missed. “Strike two,” he cried.

The boy paused a moment to examine his bat and ball carefully. He spit on his hands and rubbed them together. He straightened his cap and said once more, “I’m the greatest hitter in the world!” Again he tossed the ball up in the air and swung at it. He missed. “Strike three.” Then the boy exclaimed, “Wow! I’m the greatest pitcher in the world!”

Your attitude determines how circumstances impact your life. The little boy’s circumstances had not changed. But his optimistic attitude prompted him to give an encouraging meaning to what happened.

A man once owned a record company. (Does anyone remember what vinyl discs were?) Besides running the operation, he also spent many hours in production listening to the “mother disc,” which was the record from which all subsequent records were pressed. Over the years, he became adept at catching the “pops and sizzles.” These were the imperfections that had to be eliminated on the master disc, or they would be copied on every subsequent record made from that master.

One day someone remarked to him that working with music must be enjoyable. His response was enlightening. He said, “You know, I haven’t listened to music in years. When I turn on my sophisticated home stereo, no matter what recording I’m listening to, all I hear are the ‘pops and sizzles.’ ”

That is the way we are with life sometimes. We have become so attuned to all the negatives that we look at everything—no matter how good it may be—with a destructive mental attitude. The world has programmed us to be negative. News is not news unless it is bad or negative. You rarely see good deeds or positive things on the news.

We concentrate on the difficulties in our lives, on what has gone wrong. We focus on what we do not have and the mistakes we have made. We look at our regrets and bad decisions.

I love to read the writings of the Apostle Paul. If anyone had opportunities to have a bad attitude, he had many. He describes some of his situations in Second Corinthians 11:25 (NLT), “Three times I was beaten with rods. Once I was stoned. Three times I was shipwrecked. Once I spent a whole night and a day adrift at sea.”

And yet in every situation Paul encountered, he declared in Romans 8:36–37 (NKJV), “As it is written: ‘For Your sake we are killed all day long; We are accounted as sheep for the slaughter.’ Yet in all these things we are more than conquerors through Him who loved us.”

The Apostle Paul’s attitude was that he wasn’t just a conqueror. In Christ, he was more than a conqueror. When you lean on God’s ability and acquire His attitudes, He will bring you victoriously through every circumstance and situation that comes your way.

I want to admonish you—ALWAYS KEEP A POSITIVE ATTITUDE! 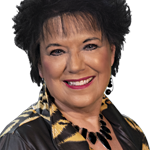