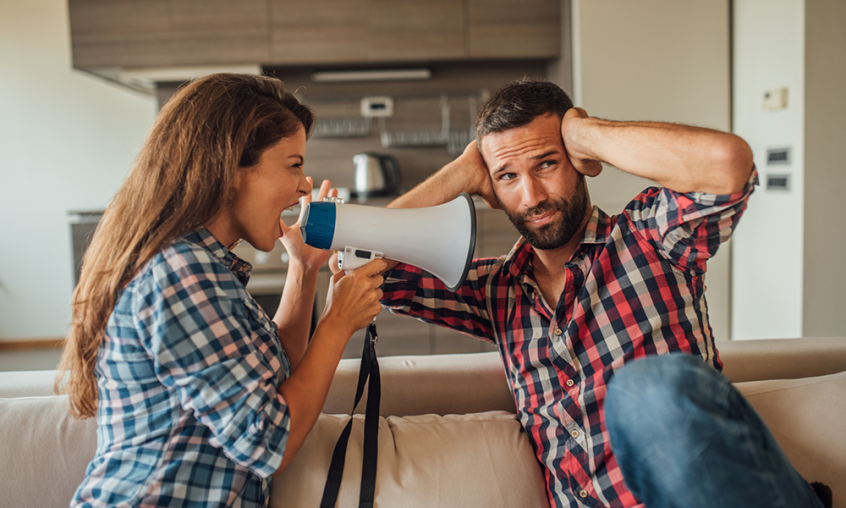 One thing that can cause a lot of problems in marriages is lack of communication. People have different personalities and ways of communicating. Some people are loud. Others are quiet. If a loud person gets hooked up with a quiet person, it's easy for conflict to start brewing.

Some families are just loud. Everything they do is loud. They talk loud. They have fun loud. And they fight loud. Other families are so quiet you could hear a pin drop in their homes.

I came from a quiet family, but my husband, Ken, is from a loud family. Growing up I was taught that only one person spoke at a time. If you had something to say, you never interrupted while another family member was talking. You waited until that person finished before speaking.

But when I married Ken, I quickly learned that if you didn't interrupt, you didn't get to talk. And if you didn't talk loud enough, you weren't heard. I saw only one solution: I learned to talk loud!

Get to the Point, Sweetheart!

Most women feel they have to tell every detail of a situation in their conversations. But men usually just like to hear the bottom line. Women need to understand that most men don't want to hear all the whys and wherefores. On the other hand, husbands can learn to be a little more patient and listen when their wives are trying to tell them something.

We live in such a fast-paced world that it seems as though we don't have time to communicate. But we can't afford not to communicate. Constant communication will end disputes and take our marriages to the next level.

Sometimes spouses conclude that if they can't get their point across, there's no reason to continue communicating. So they just stop talking. But when we stop talking to each other, we take the first step toward growing apart. The wife begins to do her thing and the husband does his thing. Eventually all communication stops. When this happens, the marriage is no longer a marriage but an arrangement.

Opening the Lines of Communication

No two people agree on everything all the time. We won't learn how to communicate effectively without going through some disagreements or hard times in our marriages. But all of us can get to the point in our marriages where we can say what we think and work through any situation that may come up.

Here are two ways to keep the lines of communication open:

1) Listen with our mouths shut.

We need to hear our spouses out and then respond. Many times we're so busy figuring out how we're going to respond that we don't hear everything that the other person said. And then we end up responding inappropriately.

2) Respond assertively instead of aggressively.

Aggressive attacks call for retaliation. But instead of being aggressive, we can be assertive by using words like "I feel" instead of words like "you never" and "you're so. . . ."

If our spouses are going to feel safe to share their true feelings, we can't slap them down with our words when they tell us how they feel. If we do, they may quit talking. They may passively go along with what we've said, but one day they'll blow up. It's like a pressure cooker that has a clogged release valve. Eventually it will blow sky high!

Blowups can be avoided when we learn how to express our feelings properly. As long as we keep them locked up, they will remain tucked away somewhere in the back of our mind. Our spouse only has to push the right button and those feelings will come spewing out.

Marriage is teamwork, and communication plays an important role for any team to work. But as we learn to communicate with our spouses and express our feelings the right way, we will build stronger, happier marriages that last.