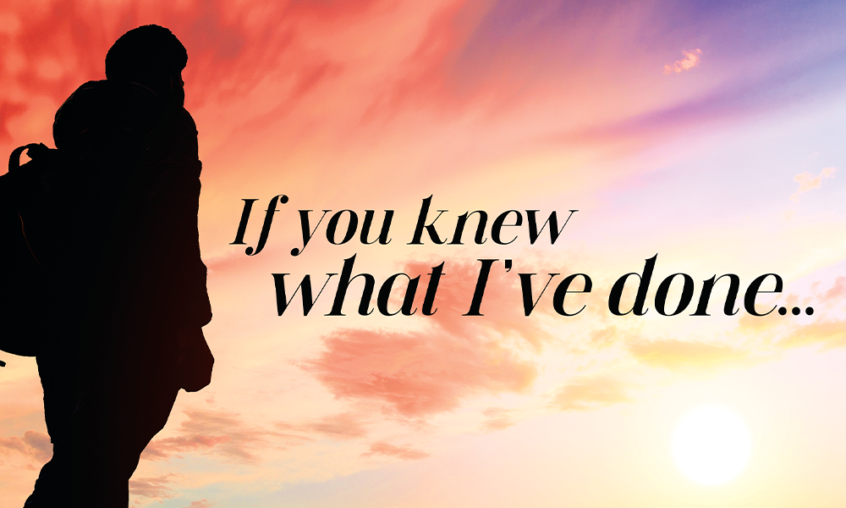 ONE DAY IN a small town somewhere in America, two men were having an intense conversation. Both were dressed in biker garb—the only thing they had in common. They’d developed an unusual friendship, and now they met every Tuesday for lunch at one of the local diners.

“I’m bad news,” the bigger of the two men said. He stood at a burly six-five, and nobody messed with him. The patch over his left eye and the long scar across his face added to his sinister appearance.

“Look, preacher,” he continued, “I respect you. You’re nice to me and my boys. But I’m just too bad for God.”

“God loves you,” insisted the preacher, “and He wants you to be His son.”

“God loves you,” the huge man responded, “but He doesn’t want people like me. If you knew the things I’ve done . . .” His voice trailed off as he stared out the window at where their bikes were parked.

“What’s the worst thing you’ve ever done?” asked the preacher. “Tell me. Have you ever killed a man and taken his wife?”

“No!” growled the giant, turning so fast it looked as though his neck would snap. “Why would you even suggest that?”

“The Bible talks about a guy named David. And that’s what he did,” said the preacher. “David had an innocent man killed so he could marry his wife. Yet God later called David a man after His own heart.”

The preacher’s friend stood to his full height, his eyes filled with fire. “Why would God forgive a murderer?” he barked. “A man like that deserves to die!”

“Yes,” said the preacher, “but Jesus died in his place. Jesus’ death on the cross paid for all sin. When He sacrificed His blood, He didn’t leave any sin out.” The big man stopped and  looked at the preacher.

“When you accept Jesus into your heart and make Him Lord of your life, you become a new creation in Christ,” continued the big man’s friend. “That’s what a man named Paul wrote in his second letter to the Christians in Corinth (2 Cor. 5:17). And Paul himself was a murderer. Before he accepted Jesus as his Savior and Lord, he had Christians killed and thrown in jail.

“Many years before, the Jewish prophet Isaiah talked about this kind of changed life. He said, ‘Though your sins are like scarlet, they shall be as white as snow’ (Isaiah 1:18 NIV). WHEN YOU ACCEPT WHAT JESUS DID FOR YOU ON THE CROSS, GOD WIPES YOUR SLATE CLEAN.

He doesn’t remember anything bad you ever did. He gives you a new start in life.”

The next day that giant of a man came to the preacher’s church and gave his life to Christ.

Are you like that man? Do you feel that God could never forgive you for what you’ve done? If you do, you don’t know the power in Jesus’ blood. You can receive God’s forgiveness through Christ.

If you’re ready to start your life over, repeat this prayer from your heart: God, I come to You in Jesus’ Name. The Bible says, “If you declare with your mouth, ‘Jesus is Lord,’ and believe in your heart that God raised him from the dead, you will be saved” (Romans 10:9 NIV). I believe in my heart that Jesus is Your Son and that You raised Him from the dead. And I confess Jesus as my Lord. Therefore, I am saved! Thank You!

If you have prayed this prayer for the first time, welcome to God’s family! Email us at [email protected] and let us know about it. We want to send you some free materials to get you started in your new life as God’s child.