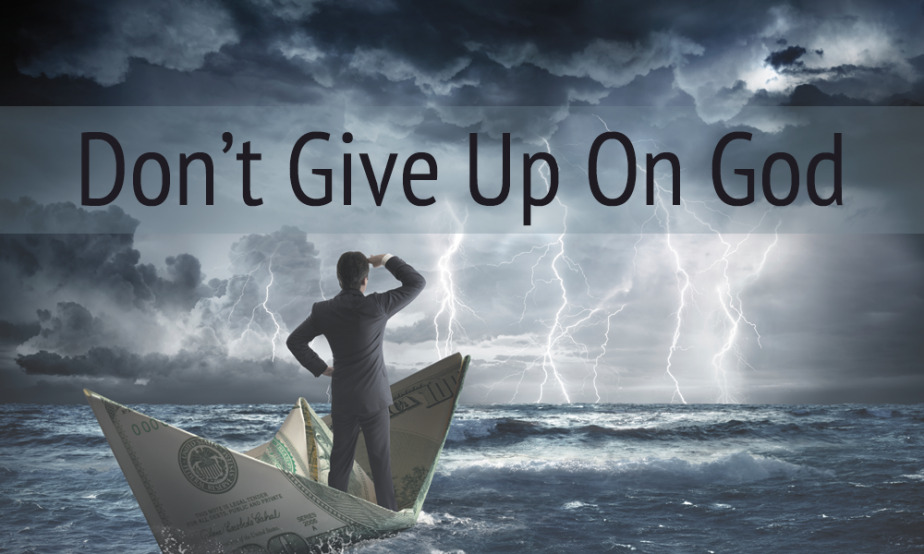 In the uncertainty of modern life, many have given up on the Word. From their point of view, the “shoreline” they’ve been seeking so desperately is nowhere in sight. They’re about to “abandon ship” where faith is concerned. But if we want to experience victory over our trials and troubles, we must learn to esteem the virtues of God’s Word.

THE WORD OF GOD—the Bible—is not just a collection of words and sayings in a sacred book. God’s Word, including each word that is written, is the very power of God to those who will believe it (Rom. 1:16). It is a rock we can stand on in troubled times.

When the tides of change come rolling in and fear seems to be everywhere present, God’s Word is a solid, sure foundation that the storm cannot wash away.

Whatever we’re going through, Jesus knows about it. And unlike other religions of the world, He is with us. He’s not in a tomb! He’s alive forevermore! He is in us and for us!Kenneth W. Hagin

God’s Word Will Not Fail Us

It’s important for us to realize that after we’ve prayed, an apparent delay in the answer doesn’t mean that God hasn’t heard us. It doesn’t mean that help is not on the way! First John 5:14–15 (NKJV) says, “Now this is the confidence that we have in Him, that if we ask anything according to His will, HE HEARS US. And IF WE KNOW THAT HE HEARS US, whatever we ask, WE KNOW THAT WE HAVE THE PETITIONS THAT WE HAVE ASKED OF HIM.” God’s Word will not fail us if we’ll refuse to give up.

Someone once said to me, “I’ve been believing God for so long!” I encouraged this person, “Don’t quit! Your faith will see you through if you won’t give up! Keep standing on the rock of God’s Word. It’s a sure Word, and it won’t let you down!”

You see, when we fail to receive something that God has promised in His Word, it’s because we didn’t approach Him in faith, or we abandoned our faith too soon.

Remember the disciples at sea in their storm-tossed ship? Jesus calmed the storm and then asked them, “How is it that you have no faith?” (Mark 4:40). Because of the fierce circumstances, they had abandoned faith in Jesus’ words: “Let us cross over to the other side” (v. 35). Those words were powerful enough to see them through any storm, but they didn’t “hold fast” to those living, power-filled words.

I wonder how many people have “abandoned ship” and let go of their faith when the answer was just around the corner. In another storm, Jesus walked on the water to the disciples’ ship as they battled the elements. Some researchers say that particular body of water was only about four miles wide at its narrowest point. If that’s true, when the storm was at its worst, the disciples could have been less than a half mile or even just a few yards from their destination!

Friend, your ship may be storm-tossed and battered, but you may be closer to land than you think! The devil may be shouting, You’ll never win! But God has victory in store for you!

Run to the Word of God. Realize that the Lord will never leave you and that you’re never out of His reach or His care. Don’t abandon ship just before you reach the shore! No matter how rough the storm or uncertain the times, if you’ll hold fast to your confession of faith in God’s Word, every step that you take in faith will draw you closer to your promised victory!

Hebrews 4:16 tells us that God is a giver. But how many people who believe this still hesitate to go to Him with their problems? They lack the boldness and confidence to approach His throne. They don’t understand that because Jesus’ blood has been applied to their hearts as believers, they have free access to God’s grace.

Friend, you don’t have to go to God with your head down, feeling intimidated and unworthy. You don’t have to beg and plead with Him to meet your needs. No! Because of Jesus, you can go confidently to God’s throne of grace to obtain mercy and receive help in your time of need. God is a giver, and at His throne you can receive freely from Him.

SHARE!
Did this article encourage you? Tell us about it! Just #RhemaWOF on social media.