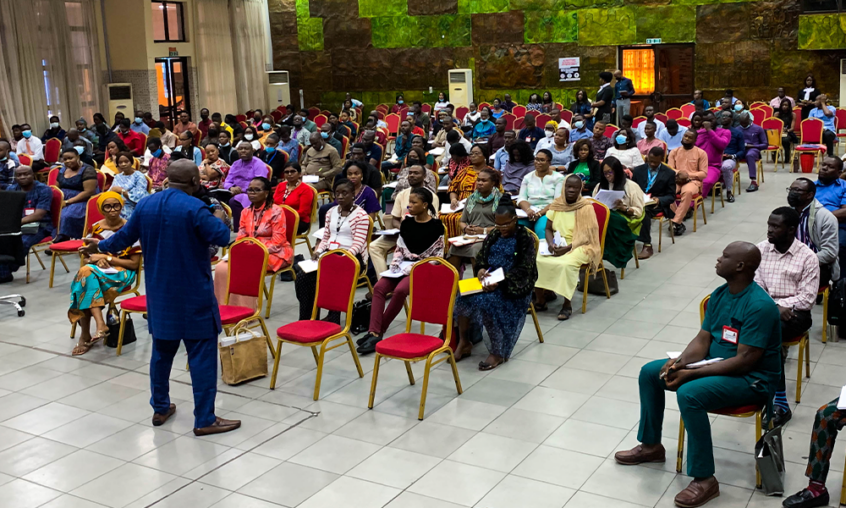 “You are called to preach. You will never know joy, fulfillment, or happiness in life, except you preach the Gospel.” Those are the words Tokunbo (Toks) Adejuwon heard in his heart one day in his first year of middle school.

He responded, “Lord, if that’s what You want me to do, then I’m going for it.”

Toks first sensed the call to preach around the age of 5. He wasn’t sure why he felt that way. He didn’t come from a family of preachers, nor did he know any. Growing up in an academic environment, he dreamed of being a neurosurgeon. Yet, the little boy from Ibadan, Nigeria, would go to his bedroom and preach to an imaginary audience.

Saved at age 10, Toks immediately became consumed with studying God’s Word. He came across a copy of the book What Faith Is by Kenneth E. Hagin, where he read Brother Hagin’s healing testimony.

Toks spent his childhood in and out of the hospital. He was told he’d be on medication for the rest of his life. As he read Brother Hagin’s healing testimony, he believed God could heal him too. He figured if he acted on God’s Word as Brother Hagin had done, he would see the same results. And he did. Over time, as Toks faithfully applied the Word, he was healed.

Toks knew in his spirit to follow Kenneth Hagin Ministries, and he began reading every book they published. He read the books repeatedly.

While reading Kenneth E. Hagin’s book Understanding the Anointing, he came across this sentence: “From this place—Rhema Bible Training Center—we’re going to send out ‘Spiritmen’ and ‘Spiritwomen.’ ” Instantly, in his spirit, he heard, “There’s going to be a Rhema in Nigeria, and you are going to be a part of that.”

After Toks was denied a visa four times to attend Rhema USA, God led him to Rhema India, where he graduated in 2004.

“In a nation where a hunger for the supernatural exists—both godly and ungodly—people are getting hold of truth.”

Matt Beemer (RBTC ’92) established Rhema Nigeria in the capital city of Abuja in 2010. A mutual acquaintance introduced Toks to Matt, and shortly after that meeting, Toks became the school’s first employee. He did anything and everything he could to help Rhema Nigeria succeed.

In 2018 Toks and his wife, Dr. Akunna, became the national directors for Rhema Nigeria. They also teach many of the school’s classes.

Akunna says when they married, her husband “infected” her with the faith message. “You can’t get close to Toks and not breathe Kenneth E. Hagin,” she says.

As national directors, they oversee more than 4,500 students on 10 campuses in nine cities, with plans for additional campuses. Among the students are pastors, doctors, lawyers, politicians,
and prominent businesspeople.

“Rhema is popular in Nigeria because of the books and The Word of Faith magazine that were brought here in the late ’70s and early ’80s,” says Toks. “The Kenneth Hagin name here is what the Billy Graham name is in the United States.”

There’s no doubt that the same spirit of faith caught by Toks as a young boy is spreading to Rhema Nigeria’s student body. Testimonies of miracles are a regular occurrence.

Many students have testified to not being sick since attending the class Christ the Healer. They have also seen their businesses turn around and increase. Students and graduates are using their authority in Christ to raise people from the dead. In a nation where a hunger for the supernatural exists—both godly and ungodly—people are getting hold of truth.

Toks and Akunna are intentional about getting that truth to unreached people groups in the country through the school’s REACH initiative (Radical Evangelistic Advancement for Church planters and Harvesters).

Through REACH, trained missionaries are being sent to take the Gospel and plant churches in mostly non-Christian northern Nigeria. Several Kenneth Hagin books have been translated into Hausa—the region’s primary dialect. Others are in the works. “The message of faith is coming more to the fore in the nation,” shares Toks.

Spreading God’s truth to unreached people doesn’t stop there. Akunna, an optometrist, runs a private practice and has two eye clinics in Abuja. “My practice took off when I graduated from Rhema Nigeria in 2013,” she says. “I moved from one level to another because of the courses I took at Rhema.”

Most people visit a doctor to seek healing. But Akunna’s patients come to her office not only to get healed but “infected”—with faith, that is.

About eight years ago, the Lord told Akunna to start reading Kenneth E. Hagin’s book Faith Food with her employees every morning. Today, everyone who works in her office believes God and speaks faith.

“Before I employ anyone, I ask if they are born again. If they aren’t, I ask if I can pray for them,” she shares. “I don’t force them. But my mindset is, ‘They’re coming into the fold.’ ”

Akunna’s patients sense that faith atmosphere. She recalls a Muslim patient who said, “I don’t know what it is about your office, but anytime I want peace, I just come here. There’s something calm here.” Another patient thanked her and said, “I don’t think I came for my eye. I came here for what you’re saying to me.”

Toks’ passion for the message of faith has had a ripple effect. In addition to his wife and people he’s ministered to worldwide, he says his children, friends, and relatives all have been inspired by his passion to live a life of faith in God’s Word.

“I give anything I do everything I’ve got,” he says. “I guess it kind of gets people’s attention and rubs off on them.”

That day in middle school, God told Toks to preach the Gospel. And he’s been doing that fervently for nearly 40 years, first as a pastor and now as a Bible school director and itinerant minister. As a result, he’s living the happy, fulfilled life the Lord said he would.

“I’m doing what I was born to do—be a part of something affecting the world,” says Toks. “I feel like I’m living in my dreams, knowing that I’m in the center of God’s will. I get to see people’s lives get blessed and get a hold of truth. My health and finances are good. I have a good wife and kids. That’s priceless.”

Toks and Akunna look forward to what lies ahead. They believe that in a country of over 200 million people, a tithe—or 20 million Rhema Nigeria graduates—wouldn’t be a bad idea. “I see the message of faith and the move of the Spirit sweeping across Nigeria like a tsunami,” says Toks. And why not? All things are possible through faith in God.