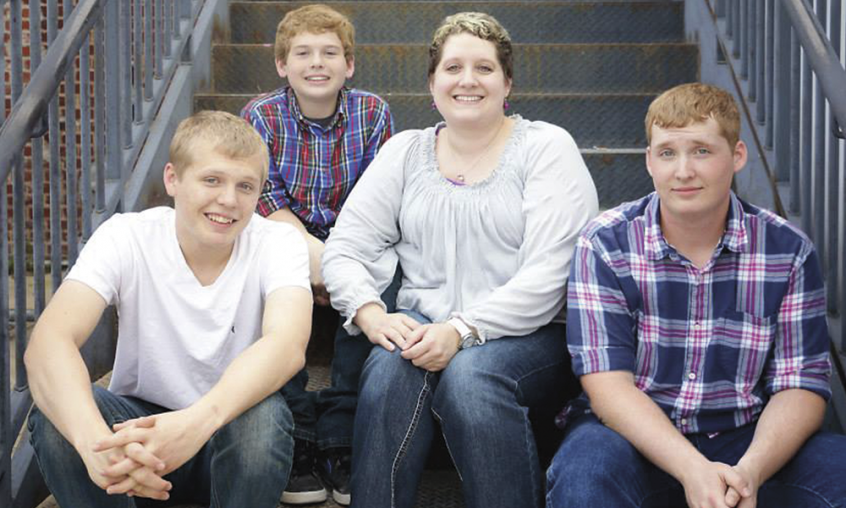 “Gwen, you have breast cancer,” said the nurse on the other end of the phone.

Shaken. Confused. A dark cloud moved in on an otherwise beautiful fall November day in 2013. Gwen Mullins’ throat tightened, and tears trickled down her cheeks. She couldn’t have cancer. She was a single mother of three boys.

Gwen first noticed the lump in September. At first, she ignored it, but it wouldn’t stop hurting. She made an appointment with her doctor who scheduled a mammogram.

The lab technician took picture after picture, getting the breast from every angle. Then the radiologist wanted an ultrasound. Before Gwen left, a needle biopsy was scheduled for the following week.

None of these tests concerned Gwen. Except for the pain in her breast, her 39-year-old body felt healthy and strong. Besides, she believed Isaiah 54:17—no weapon formed against her body could prosper.

Snapping herself back to reality, Gwen continued listening to the nurse. “You do have cancer. We want you to come in next week and have an MRI. You’ll need to see a surgeon within two weeks. It’s not the fastest growing cancer, but it’s not the slowest growing either.”

The news punctured Gwen’s soul. The only place she wanted to be at that moment was at Rhema Bible Church. So Gwen got in her car and drove straight there.

Associate pastor Bill Ray’s warm smile greeted Gwen. She blurted out that she needed to talk with him right then. Once in his office, she said, “They told me I have cancer!”

“Okay,” Pastor Bill said calmly. “We know that everything has to bow to the Name of Jesus.” He opened his Bible, and together they read healing scriptures for nearly an hour. Finally, his fingers turned to Numbers chapter 13. He asked, “Are you going to look at the grapes or the giants?”

Gwen knew the Bible story. God promised the Israelites a land flowing with milk and honey, but giants were in the land of promise. Only Joshua and Caleb believed they could overcome the giants. The rest of the people didn’t. Whose report was she going to believe? The test results or God’s promise? Gwen had a choice to make.

After leaving Rhema Bible Church, Gwen only shared the doctor’s report with her parents and a few close friends. Unsure of how her three boys would handle the news, she waited to tell them. Besides, she believed that God would perform a miracle before she had the MRI. She constantly commanded the lump to dry up in the Name of Jesus.

A few days later when the motorized bed rolled Gwen out of the MRI scanner, a technician began removing the IV. “Is it gone?” she asked.

“No,” replied the tech, surprised by the question.

“Wait!” Gwen thought. “The lump was supposed to be gone!” The technician’s words felt like a dagger. Although Gwen was confessing scripture, the opposite of what she wanted to see kept happening. That was the biggest battle for her.

Gwen left the hospital with an accordion folder filled with brochures on breast cancer. “What am I supposed to do with all this?” she wondered. It was overwhelming. Ephesians 6:13 (NKJV) became Gwen’s anchor. “Therefore take up the whole armor of God, that you may be able to withstand in the evil day, and having done all, to stand.”

Gwen chose to put on the armor of God’s Word. She refused to give up on her miracle. She continually quoted scripture and believed God that she wouldn’t have to have chemotherapy.

When Gwen met with the oncologist, she argued to no avail about chemo. Although she asked God for other options, she didn’t receive the miracle she hoped for. She finally agreed to the treatment. Surgery was scheduled for early December.

The Word of God was her anchor.

Now she had to tell her boys.

Gwen first told Alex, 12, and Nate, 16, what she was up against. Her oldest was still at work.

Their unwavering faith lifted her heart.

That evening, Gwen told Thomas. The high school senior held back his emotions and spoke words of faith—words he fully believed. “Mom, you’ll be fine,” he said. “God is good. He’s the healer.”

Their words undergirded her in the drawn-out battle.

As Gwen went through chemo, the day came when her hair fell out in clumps. It happened to be the day after her 40th birthday. Eventually, a beautician shaved her head. “That was a rough day,” she admits. “I’m the type of person who cries, but then I don’t leave until I’m speaking faith.”

When Lynette Hagin heard what happened, she offered to take Gwen wig shopping. While in the store, Gwen insecurely removed her scarf, exposing her hairless head.

“You’ll get through this,” Lynette said. “Pastor Ken and I are standing with you.”

It was another moment when Gwen’s faith was encouraged.

Dealing With the Side Effects

“Chemo brain,” or mental fogginess, is a side effect of chemotherapy. Because of it, Gwen couldn’t read her Bible or watch television. Fatigue attacked. At times, she could only crawl to the stairs before starting the climb up them to wake her boys for school.

During her third chemo cycle, Gwen experienced unbearable bone pain. She cried out, “God, I don’t want to wake up. I can’t take this anymore. Just let me come home.” However, from her heart rose, “I will live and not die, and declare the works of the Lord” (Ps. 118:17).

Throughout Gwen’s cancer treatment, the Word of God was her anchor. She read and reread the Bible stories she learned in children’s church. Although imprisoned, Joseph’s dream still came true. Against all odds, David slew a giant. The three Hebrew children safely came out of the fiery furnace. When thrown into the lion’s den, Daniel was not harmed.

The lives of the people in these stories encouraged Gwen. They always trusted God no matter what happened to them. Their faith bolstered hers.

“I couldn’t imagine going through chemo and radiation without having God’s Word,” says Gwen. During the hard times, it was the anchor that held her steady. It gave her hope to press forward continually.

When the doctor’s report revealed the lump was gone, Gwen was thrilled. In 2015, she returned for a second year at Rhema Bible Training College. After graduating, she has been on the go, traveling to Beirut, Lebanon; Cairo, Egypt; and Manchester, England. She participated in women’s conferences, visited a refugee camp, and helped with a youth conference. She has also written a book.

When Gwen met with her oncologist on October 4, 2018, she heard words that were music to her ears.

“You’re doing great! I’m going to drop your visits down to once a year,” he said.

After five years of testing, doctors, surgeries, chemo, and radiation, things are looking good! She walked outside, and tears of joy wetted her cheeks.