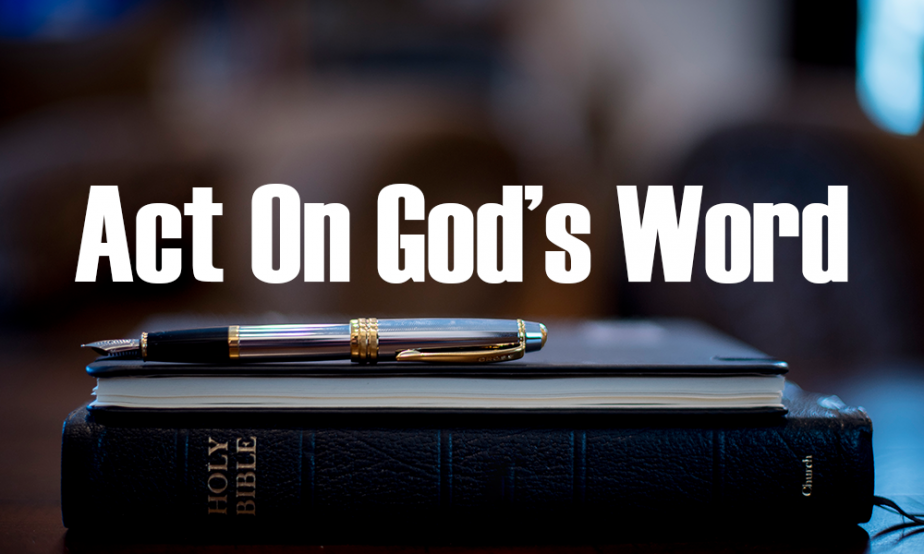 STOP TRYING to make God’s Word work and start acting on the Word. If we know that the Word is true and if we act as though it is true, it becomes a reality in our lives.

Let me share with you the testimony of A.B. Simpson. He just acted like the Word is true and received his healing. I read his testimony years ago in a Christian magazine. Dr. Simpson, a Presbyterian minister at the time of his healing, later founded the Christian and Missionary Alliance. At the age of 46, he was told he was dying of a heart condition and was given only about six months to live.

Dr. Simpson said he had heard many testimonies of healing, even in his own church. He took a short leave of absence and went up to his farm, where he could spend a lot of time studying God’s Word.

At the end of two weeks, Dr. Simpson took a piece of paper and a pencil and wrote, “After searching the Word of God for two weeks, I am convinced the Bible teaches that divine healing is for us today. And I, this day, accept Jesus Christ as my Healer and declare that I am now healed from heart trouble and that I am well. And I promise God to use this new-found strength and life and energy entirely for His purpose and to further the Gospel. I promise God I will share this truth of healing with others and will help them.”

Whatever you’re believing God for, act like His Word is true for you.Kenneth E. Hagin

After that time, Dr. Simpson went to a luncheon where he was to be the speaker. At the gathering he gave his testimony that he had searched the Bible and concluded that Jesus was still the Healer today.

After the luncheon, he was invited to go mountain climbing by the men to whom he had spoken. The thought immediately came to him that he wouldn’t be able to go because of his heart condition. But then he remembered he had declared his healing, so he accepted the invitation. Up to this point, he had not really seen or felt his healing—he had just accepted it and declared it by faith.

As he climbed, every time he got his mind off the Word of God, he would begin to feel the symptoms of his heart condition. But as he claimed the Word again for his healing, all the symptoms would go away. He fought this battle all the way up the mountain. Once at the top, he walked about victorious, without any symptoms!

Real faith holds on to the blessings of God. Real faith is a child of the knowledge of God’s Word. Dr. Simpson acted on the Word and got real faith from it. Instead of trying to believe, he just acted upon the Word. He acted like the Word is true. Whatever you’re believing God for, act like His Word is true for you.

Did this article encourage you? Tell us about it on social media! Just #RhemaWOF.