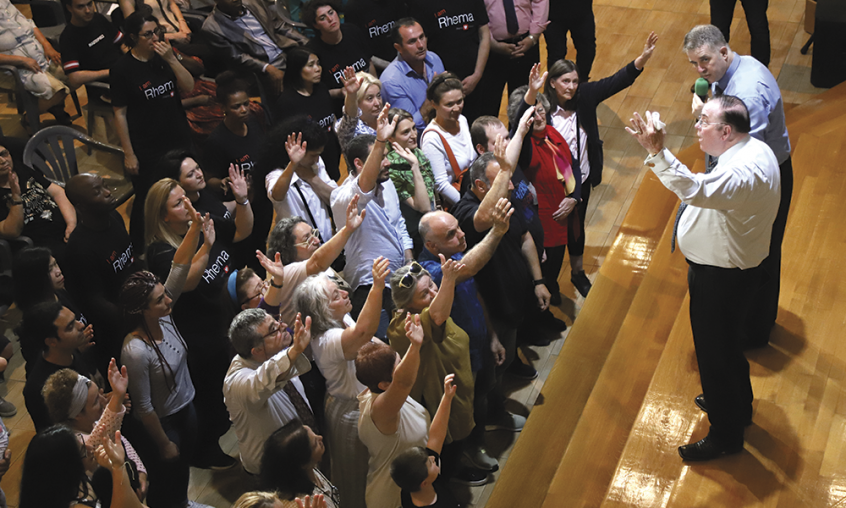 From airplane windows above, the ocean’s azure expanse gave way to the first glimpse of Europe’s lush landscape. The gorgeous continent revealed only a hint of the abundant treasure within—its people. Intellectually rich, but spiritually poor, only 4% of over 750 million Europeans are born again.

That is exactly why Kenneth and Lynette Hagin flew across the Atlantic in May and June 2019. Souls are at stake.

Team leaders debriefed over a meal, and the Hagins shared Rhema Bible Training College’s worldwide state of affairs. It is growing! The number of current students reached a new high with a global RBTC enrollment of 18,616 in April 2019.

Numbers do not reflect prestige—they represent change. For every RBTC student equipped, there are innumerable souls to be reached as each graduate steps into his or her unique calling. The pulse of Christianity is quickening through the diverse regions of Europe, and Rhema is playing a role in shaping nations.

The whirlwind trip took Kenneth and Lynette to a new country every day. With no time to waste, they flew to Croatia. Formerly under communist rule, Croatians have grown in freedom since 1990. The Hagins met with local pastors for an encouraging luncheon, then held a television interview before the first healing meeting. What they experienced became the trend for their public gatherings.

Not only have Faith Library Publications books changed lives, but they have changed nations as well.

An impressive facility was filled to capacity. Beautiful worship permeated the room, and receptive hearts eagerly received the message. Much of the crowd came to have hands laid on them for healing. Then many responded to the salvation invitation and received Jesus as their Lord. Before the night ended, Kenneth Hagin ministered to the pastors in attendance. He and Lynette laid hands on them and prayed for supernatural breakthrough and for an anointing to fulfill their call.

Next was Albania, also under communist rule until they elected their first president in 1992. The Albanian people have changed along with their country, and Christianity is making an entrance. That particular night after hearing the Word, many more received Jesus, and three-fourths of the crowd found a new freedom: healing.

More healings and salvations followed the next day in Italy on the island of Sicily, the largest island on the Mediterranean Sea. Rhema Ministerial Association Italy held their regional meeting the following morning. Those attending submitted questions for the Q&A session. The Hagins thoughtfully and transparently shared their wisdom gained through a lifetime of ministry. The general session brought empowerment as Kenneth W. Hagin taught about every member taking their place in the Body of Christ and the importance of being anointed for their position.

The final destination for healing meetings was Greece. Almost the entire audience came forward for healing. One woman suffered a stroke and could not walk. Her sons brought her to the meeting, traveling all night by boat. She began taking steps even before the call for healing! Now she is fully walking again. A private Q&A session was held for pastors and Rhema Greece students and alumni. Once again, wisdom flowed and hearts were strengthened. Between meetings, there were a few opportunities to see historical and Biblical sites from Athens to Thessaloniki.

The Life-Changing Power of Books

Before the jet could return to the U.S., there was one more important stop to make: Malta. There was a televised book release of The Believer’s Authority now translated into Maltese.

But the Maltese translation was not the only book in the spotlight! Kenneth W. Hagin’s book Called of God was given to pastors in Croatia, Albania, and Greece in their respective languages.

Along with the mandate to teach people faith, the Lord specifically directed the late Kenneth E. Hagin to focus efforts on the printed page. Not only have Faith Library Publications books changed lives, but they have changed nations as well.

Kenneth and Lynette continue to keep step with the mandate. It is not only their mission—it is their lifestyle. Their relentless commitment is witnessed by all, shared by the worldwide Rhema family, and reflected in God’s mandate to “Go teach My people faith.”

[Editor’s Note: The KHM staff would like to express a very happy 80th birthday to Pastor Hagin (September 3). We are witnesses that your determination does not wane. May you continue to relentlessly press forward!]

Kenneth Hagin Ministries would like to extend a special thank you to the teams from every area who hosted ministry events and their leaders. The tenacity, excellence, hard work, and sacrifice of every person involved is more than appreciated. May you receive rich reward for your investment!

The whirlwind trip took Kenneth and Lynette to a new country every day.