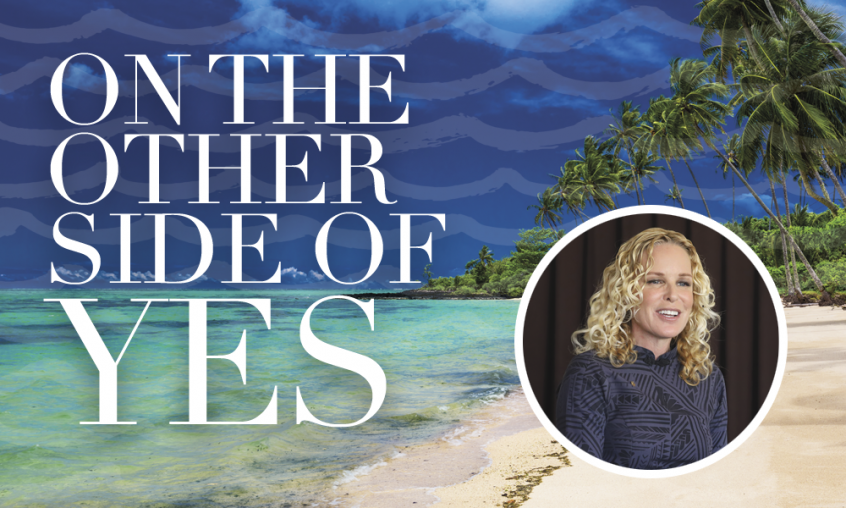 On the Other Side of Yes

In January 2009, Pattie Duininck-Ah Kui and her two children boarded a plane to Apia, Samoa. This time without Pattie’s first husband, Kelly Duininck, who had died from Lou Gehrig’s disease. Although she had made this trip at least 50 times before, she had butterflies in her stomach. Pattie felt as though she was stepping out on her own for the first time in 20 years.

After Kelly’s death, Pattie didn’t spend much time wondering what she should do. She knew she had to return to Samoa. While flying over the South Pacific, she heard God’s gentle voice saying, “Thank you.” He was thanking her for not quitting.

It’s easy to quit in the midst of adversity. Nobody would have faulted Pattie if she remained in the States. But oh the fruit that blossomed because of her obedience.

Today, Rhema South Pacific is expanding and thriving! Believers from 20 nations, representing over 100 churches and more than 25 denominations have attended the four-year accredited college. The school also opened campuses in Vanuatu and Suva Fiji.

In 2014, Pattie married James Ah Kui. Together they are reaching the remote islands of the South Pacific on the ministry’s 100-foot ship, the Uttermost Witness. Since 1997, men and women from all walks of life have trained at Rhema South Pacific. They are taking what they learned and telling their families, communities, and nations.

Here are testimonies of people whose lives were changed on the other side of Pattie’s yes.

I believe the decisions you make in your life to quit or keep going will affect the future of a lot of people.Pattie DuIninck-Ah Kui

Neru Pase had just graduated from Rhema South Pacific when he received a phone call from his dad asking him to come home. His mother was ill.

When he got there, his father directed Neru to a room where his mom groaned in pain. Her breathing was weak, and she had a blank stare. His dad was massaging her head with Samoan leaves, trying anything to help her feel better.

Neru’s training at Rhema kicked in. He learned that it is still God’s will to heal. Healing scriptures rose inside him. “For all the promises of God in Him are Yes, and in Him Amen” (2 Cor. 1:20 NKJV). “They will lay hands on the sick, and they will recover” (Mark 16:18 NKJV).

Neru laid his hands on his mother and prayed. She immediately felt better. Life came back into her eyes. The change was dramatic. His father asked, “What did you do?”

After graduating the second-year program, Neru is on staff at Rhema South Pacific.

Kawehi Pase was broken. Although she was born again and filled with the Holy Spirit, she was depressed and had no direction for her life. There was no peace or joy, and she had low self-esteem.

While her sister was training at Rhema South Pacific, God led Kawehi to study there in 2011. While she was at school, God healed her soul.

“My life has never been the same,” Kawehi shares. “When I came to Rhema, I got to know God. And in knowing Him, I got to know who I am in Christ. As a result, I became a better wife, sibling, auntie—and soon I will become a better mom!”

Kawehi and Neru were married in December 2016. After graduating second year, she began working at Rhema South Pacific.

A Reason to Rejoice

Tau Hunkin and her husband, Henry, are prominent leaders in the Apia community. Tau’s mother has owned a bakery and shops for over 60 years. Tau was supposed to follow in her mother’s footsteps. When the Duinincks first arrived in Samoa, Tau and Henry showed Kelly and Pattie different properties in the community. Kelly encouraged the couple to attend Rhema South Pacific. He told them they didn’t have to give up their business to go to Bible school. He shared how the Lord would use them in the business world to share the Gospel. When Tau and Henry enrolled in Rhema South Pacific, it changed their lives.

The couple encourages other business owners in Apia. They share that by seeking God’s Kingdom first, they will see God increase their finances, land, and resources. Tau also serves on a government board. They now call her pastor.

Tau serves as a board member on the Rhema South Pacific Alumni Association.

Lagolasi Fonoti and his wife moved from New Zealand to attend Rhema South Pacific. “It was one of the best decisions we ever made as a family and for me as a man,” he shares. “They taught me the Word—to come up to the standard God intended for me to be, the standard He wants a brother to be, and the standard God created me to be toward my friends.”

Another change in Lagolasi’s life involves relationships. He used to enjoy being alone and live away from people. But he learned he could have good relationships with people. Rhema taught him how to be led by the Spirit of God, even in doing simple things like parking cars and planning activities with his wife.

Lagolasi is a third-year student.

The Life of Faith

Failo Crichton is young in the Lord. Since attending Rhema South Pacific, his favorite passage of scripture is Mark 11:22–24. He is learning faith and how to believe and receive. At one time, he wanted to study law. But when a friend told him about Rhema, it was as though God said, “That is where you are to study.”

Failo is a first-year student.

Agnes Kerslake calls Rhema South Pacific a beacon of light to the uttermost parts of the world. She says that although 100 students may attend each school term, the impact is much greater because everyone has different roles and can influence many lives. For example, Agnes is a mother of three. She is a daughter and a sister. She is a village chief and an elder at her church. “Rhema has made me a much better version of the many hats I wear,” says Agnes. Her light shines brightly on every person she meets.

Agnes is a third-year student.

Stay in the Fight

When the trials of life come, God is right there to lead you through. “If I can do this,” says Pattie, “then you can do this.” Whatever confronts or challenges you to quit on God’s plan, push through! Stay faithful and trust God. Your decision to finish your race will affect countless lives!