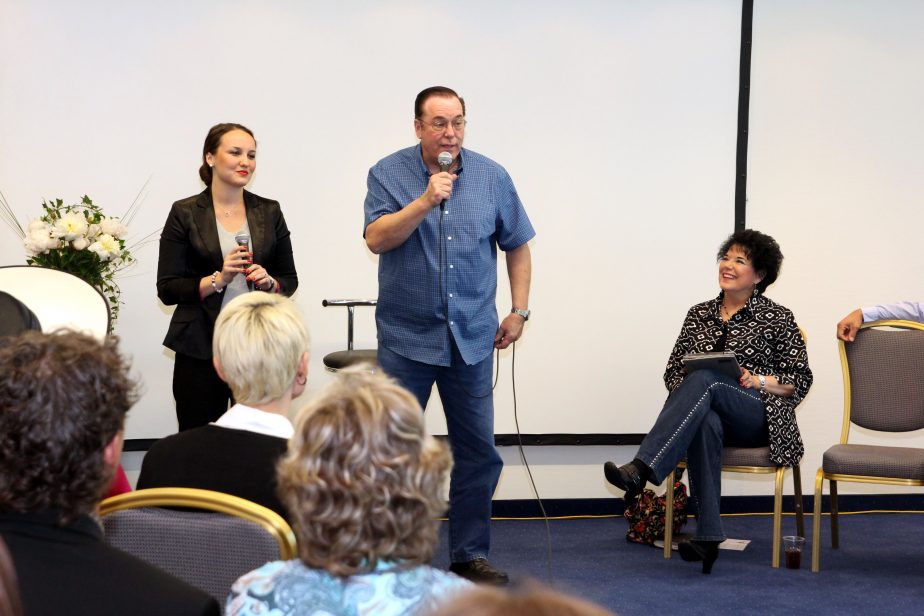 GRATITUDE. It stirred Albanian pastors and their wives to ride for hours scrunched into a minivan with their feet on their luggage to attend the first graduation at Rhema Greece.

It compelled an eastern European woman to travel three-quarters of a day by train to be at the Rhema Ukraine graduation.

What were these and others who came grateful for? Their lives had been changed through Kenneth Hagin Ministries’ teaching. And they wanted to be part of what Rhema is doing in their corner of the world.

This spring after Rhema USA’s graduation, Kenneth and Lynette Hagin and a small team of helpers packed their bags and headed overseas. They flew across nine time zones to attend commencement ceremonies for several Rhema campuses in Eastern and Western Europe. It was the Hagins’ first visit to these schools.

Geneva, Switzerland. Six hundred family members and friends packed the auditorium for a combined commencement ceremony for Rhema campuses in Nice, France, and Geneva. They watched as 38 excited men and women marched proudly across the platform to receive their diplomas. These French-speaking graduates stand ready to embark on the next phase of their walk with the Lord. After the ceremony, Kenneth W. Hagin preached a healing message. When he called for those who wanted healing to come forward for hands to be laid upon them, hundreds responded. During a meeting with alumni, Lynette Hagin encouraged them to “let every moment be a learning experience.”

Athens, Greece. Graduation tours can be a whirlwind of travel and ministry. But Greeks love to eat, and Kenneth W. Hagin enjoyed Greek salads so much that they became a diet staple during his short stay in Athens. Rhema Greece held its inaugural graduation in the beautiful five-star Novotel Hotel. Chairs for 550 were in place. But 15 minutes after the ballroom doors opened, it became clear that more seats were needed. Eventually, 742 people filled the room and others sat in the reception area. Once the service started, tears began to flow and voices rang in laughter as the 19 charter-class graduates walked across the stage, shoulders back and heads held high, to receive their diplomas.

It means so much to international students when Kenneth and Lynette Hagin attend a graduation. As one Rhema Greece graduate put it, “I finally realized who we are—we as in Rhema. Tonight I got it. I looked at the faces of the people around me and realized that we are a family.”

Sumy, Ukraine. Back in the early ’80s, Kenneth E. Hagin held prayer meetings on the Rhema USA campus every Wednesday. Maps of different regions of the world lined the Rooker Memorial Auditorium walls. For years, Rhema students and staff prayed for the USSR and the fall of Communism. Now, 30 years later, when the Rhema aircraft touched down at Sumy airport in the heart of what had seemed an impenetrable area, it created a vivid testimony of God’s faithfulness to answer prayer.

Kenneth and Lynette watched with great joy as 115 Rhema Ukraine graduates from four campuses received their diplomas. Eastern Europe will never be the same as these men and women take God’s message of hope and healing to their fellow countrymen.

Again in Ukraine, Kenneth W. Hagin conducted a healing service. After his message, of the 750 people present, more than 700 came forward to receive healing!

Aylesbury, England. The final leg of the trip took the Rhema team to England for the graduation of 67 Rhema students from four campuses in the UK and Ireland. The Hagins also held a healing service and met again with alumni, many of whom had graduated from Rhema USA and returned to the United Kingdom. Some had not been to the States for 17 years. All were grateful for the Hagins’ visit and left strengthened and encouraged by the fellowship. They returned to their churches, ministries, and jobs with a renewed determination to share the love of Christ and the message of faith with others.

To see more of what happened on the Hagins’ 2012 Euro Graduation Tour, click here to watch video highlights.