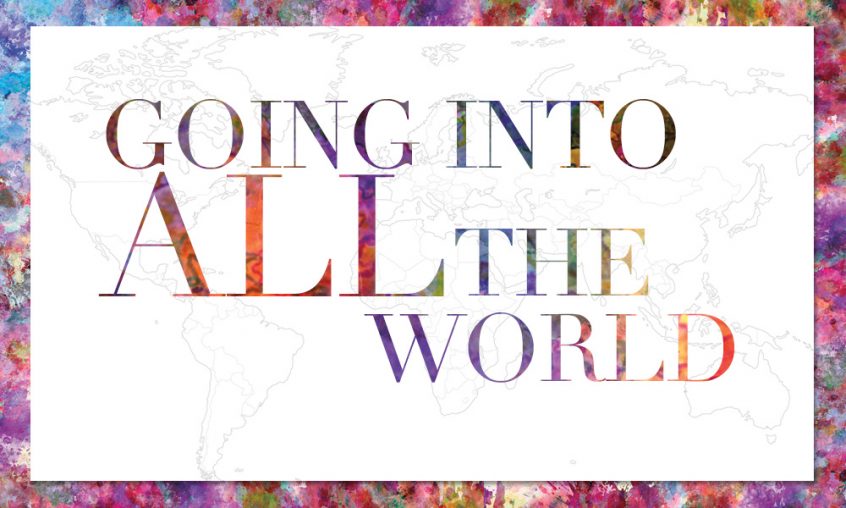 FOR MANY, spring break is a time to head to the beach or some other vacation destination. Most students look forward to sleeping in and relaxing. But a group of teens from the youth ministry of Rhema Bible Church as well as students and alumni from Rhema Bible Training College had different ideas. They set out on a week of ministry—some in other nations and others close to home.

It was an adventure in missions for Rhema’s Varsity Youth! Denise Hagin Burns, Executive Pastor and Family Ministries Pastor, and D.K. Hall, Youth Pastor, took a team of 19 teens and leaders to Guatemala over spring break. The group had many opportunities to step out of their comfort zones and rely on the Holy Spirit.

Takin’ It to the Streets

On several occasions, the team went to local parks to share the Gospel. They sang praise songs in Spanish and performed skits. “It caught everyone’s attention when they saw this group of Americans singing in Spanish,” says D.K.

Afterward, they preached a salvation message and gave an altar call. One little girl with a huge smile shot up her arm to receive Jesus. Her mom and two brothers also gave their lives to Christ that day.

Another man said he attended different churches but never received Christ. He commented that he always left feeling judged and unwelcome. The team prayed with him to make Jesus his Lord and receive the Holy Spirit. “It changes you on the inside when you share the Gospel with a stranger,” says Denise. “It gives you a boldness like you’ve never had before.”

The team also put their construction skills to the test. They built, furnished, and dedicated three homes. Many houses in Guatemala are very modest with only a dirt floor to sleep on. The new homes were built on concrete slabs and provided a comfortable place for the families.

One man was overjoyed and moved to tears. He said that he had a dream that someone would come and bless his family in a big way. He didn’t know how or when. “I know this [house] is what the dream stood for,” he shared.

The Harvest Is Ripe

The Varsity Youth ministered in several schools: a preschool, elementary, middle, an all-boys school, and a Christian school. No matter where they preached, the harvest was ripe! The students enthusiastically joined in during praise and worship and responded to altar calls. The Varsity teens helped teach lessons to the children. They loved and prayed with them too.

The week ended with a youth crusade in Antigua. Several Varsity Youth shared their testimonies with the crowd. Without discussing what they were going to say beforehand, the teens talked about the same things. They spoke about having a relationship with God and experiencing the reality of His love. Ten people were born again and filled with the Holy Spirit that night.

Reflecting on the trip, Denise shared, “I know that the students are going to be bolder in their schools. They realize it’s not so scary to walk up to people and ask, ‘Hey, do you want to accept Jesus as your Lord and Savior?’ ”

It changes you on the inside when you share the gospel with a stranger.

Every year Rhema USA students, alumni, and Rhema Bible Church members are given opportunities to take the Good News to people around the world. In March, three teams set out to do just that. On the international front, teams jetted off to Mexico and Thailand. While one group held down the home fort and ministered locally in Tulsa, Oklahoma.

The Rhema USA team of 16—led by instructor Tony McKinnon—joined a Rhema Mexico team led by directors Tim and Rhonda Rogers. The two teams held several tent crusades, did street evangelism in the villages, and ministered to children. Entire households were saved, and lives were changed eternally.

Upwards of 2,500 attended the crusades, and many of the people flooded the altar to receive salvation. There were numerous baptisms in the Holy Spirit, healings, and miracles.

An 18-year-old girl whose kidneys had been destroyed from cancer treatments came to the altar. For eight years, she had been standing in faith for new kidneys. The team prayed for her, and the next day doctors confirmed that she was completely healed!

As the two school teams served in unity, they saw 1,450 salvations and 126 healings. They also provided 251 haircuts, 153 dental services, 91 medical services, and distributed over 1,000 boxes of food that contained enough to feed a family for one month.

Jordan, a 2018 Rhema USA graduate, shared, “I love the people of Mexico. We kept saying Mexico will be wrecked for Jesus, but Mexico wrecked me for Jesus.”

With the help of students from the Rhema Mae Sot campus in northern Thailand, the Rhema USA team preached at several churches, held nightly crusades, conducted a three-day seminar, and did street evangelism. Many people were saved, healed, and filled with the Holy Spirit. New believer’s classes, taught by team members, were made available for those who received salvation at the crusades.

The group also ministered at Life Impact International, a ministry that rescues children from human trafficking. “The kids worshipped so freely and were so excited that it caused the presence of God to fall,” says Makaelyn, who just completed her first year of studies at Rhema USA.

The 10-day trip ended with the team preaching a powerful Sunday morning church service at Rhema Church Bangkok. Referring to the students, one person remarked, “I have never seen young people that preached the Word and acted on it with such boldness and accuracy.” For everyone, the trip underscored how God uses people who are willing to be used.

After a successful launch in 2017, a local missions option was offered again for students to reach the lost in their own backyard. Thirty-two students and alumni shared God’s love, power, and truth on the streets of Tulsa.

It was a glorious week filled with many opportunities for students to put into practice what they had learned in the classroom. The group ministered to everyone from the homeless, mentally ill, and drug addicted to mall workers and patrons, business people, and veterans.

Individuals went from darkness to light as the truth was spoken. Healings manifested as hands were laid on the sick. The gifts of the Spirit flowed and brought encouragement to those who needed it most. This outreach proved that you don’t have to cross the ocean to make an impact in the Kingdom of God.

Whether at home or abroad, these mission trips gave everyone who went the opportunity to fulfill Rhema’s mandate of taking the message of faith around the world. In every place, not only were people saved, healed, and set free, the participants’ lives were also forever changed.