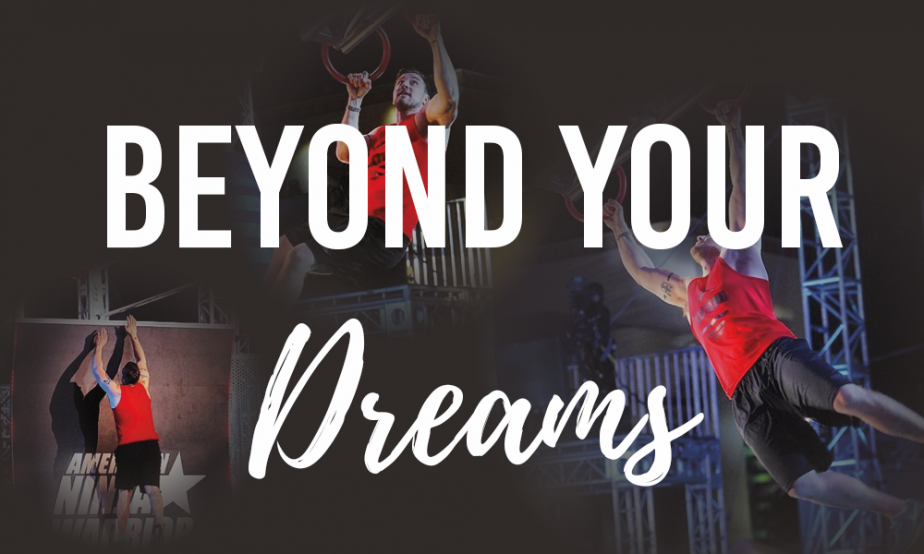 THOUSANDS OF CONTESTANTS have competed to conqueror seemingly impossible obstacles to claim NBC’s American Ninja Warrior title. Johnathan Morin, a 2008 Rhema graduate and youth pastor, is one of those competitors. Never did Johnathan imagine God would give him such a platform to share the Gospel.

Johnathan grew up in Greenville, South Carolina. In high school, he dreamed of playing college football. As a star varsity defensive end, he spent hours at the gym lifting weights to strengthen his upper and lower body. On the field, he competed hard. College recruiters were impressed with his athleticism and tenacity. One Big South school offered him a full-ride athletic scholarship. Johnathan was living the dream.

Johnathan was frustrated. He couldn’t understand why God would tell him to turn down something he had worked so hard to obtain. All his coaches, friends, and teachers were on board for him to play college ball. He wrestled with the decision. But he knew the Lord had only good plans for his life, even if he couldn’t see the full picture. His parents, both devoted Christians, had graduated from Rhema Bible Training College in 1979. And he had always sensed a call upon his life.

“Fine,” Johnathan said in surrender. “I’ll do it. I’m all in.” His coaches and friends thought he was crazy to turn down a full scholarship. But Johnathan wanted God’s plan more than his own reputation. He chose to follow Christ.

After graduating from high school in 2002, Johnathan spent a few years working in his uncle’s church. In 2006 he stepped out in faith, packed his bags, and traveled to Broken Arrow, Oklahoma, to attend Rhema Bible Training College.

“My life would’ve looked a whole lot different had I decided to go to one of the top party schools in America,” Johnathan shared. “I made a confident decision in my faith. It set me up to succeed a little further down in life.”

God Did Something Awesome

As he watched potential contestants try out, Johnathan wondered if he could audition. When he asked, the producers gave him the green light. Thankfully, he had a pair of shorts in his backpack. He saw strong men and women fail to complete the obstacle course and began to doubt. But a fighter at heart, he was determined to give it a shot.

With his youth group cheering him on, Johnathan overcame all six obstacles and moved on to the Regional Finals. He beat that course too. The producers were very impressed that a walk-on contestant had made it to the National Las Vegas Finals. Johnathan knew this was an opportunity for him to be a light for the Lord. He prayed, “God, through this show, do something cool.”

During that season, NBC brought a team to Plano, and a film crew followed Johnathan through his daily routine as a husband, father, and youth pastor. The TV crew filmed a Student Impact service, and that night 17 kids received salvation. When the segment was shown, over eight million people watched.

Shortly after that episode aired, Johnathan received an email from a family in Colorado who had seen it. The mother wrote on behalf of her 8-year-old daughter. The girl was a fan of Johnathan’s and wanted to write him a letter. “She thinks you’re a hero,” her mother wrote. She also told Johnathan that her daughter had Stage 4 neuroblastoma, a form of cancer, and didn’t have long to live.

When he received the young girl’s letter and shared it with his wife, they both wept. They saw God’s hand at work through the program.

The girl wrote, “I wish I could be brave like you, Mr. Johnathan. You are a hero. I’ve never been to church. I never had a Bible, and no one’s ever told me how to pray. I just try and talk to God with my heart. But I know God loves me, because I prayed for you and for Him to let me find you. . . .”

Johnathan knew this was a God encounter. He had asked Him to do something cool, but this was beyond what he ever thought. Writing the mother back, he asked if it was OK to speak with her daughter over the phone, because she was his hero. A few days later, with the mother’s consent, Johnathan called.

Johnathan encouraged the girl and told her about Jesus. He also prayed with her to receive Christ. Eight days later she went to be with the Lord.

A Life of Surrender

When Johnathan said yes to God’s plan for his life, never did he imagine he would be where he is today. The Student Impact youth group is thriving. Many young people are coming to know Christ each week, and they are growing in their relationship with the Lord. He’s been on four seasons of American Ninja Warrior, and he is currently in line to be on season eight, which begins airing this month.

“My goal is to walk out every day taking Jesus to a dying world,” said Johnathan. “To turn students who don’t know Christ into ones who love Him and want to change the world for Him.”

Johnathan is enjoying following Christ. Though he doesn’t know the full road ahead, he has learned to trust the One leading him. As he does that, God does His part—exceedingly above all that he can ask or think.