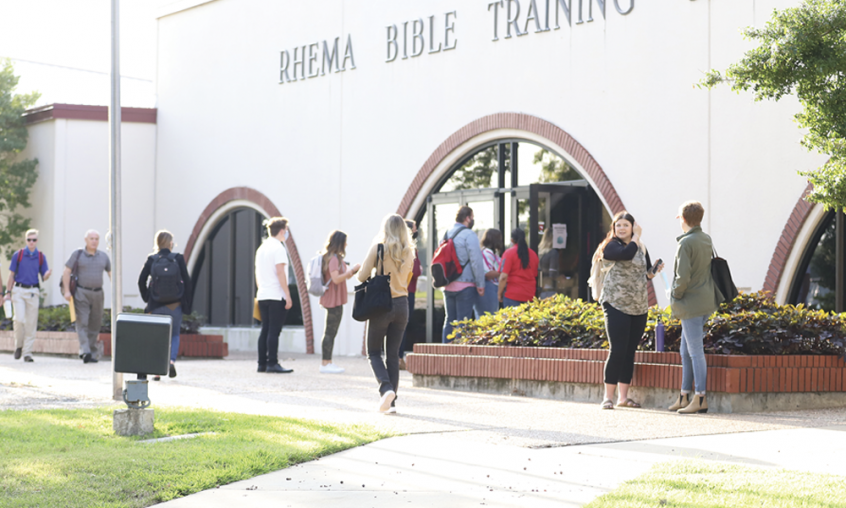 Rhema Bible Training College is more than an education. It’s discovering and preparing to fulfill God’s plan for your life! It’s about growing in God, training for ministry, teaching people, establishing a strong foundation, and building strong faith. You will learn how to hear God’s voice and recognize His leadings.

Rhema’s unique blend of practical and supernatural training gives you a solid biblical foundation that equips you for success. And targeted training and hands-on experience set you up to fulfill everything for your calling.

Over 93,000 alumni have been trained to take the message of faith to their world. Read how Rhema shaped the lives of several of them.

‘The Greatest Decision We’ve Ever Made’

“We came to Rhema six months after getting married, and sitting through those classes was like marriage counseling for us. Rhema not only helped us grow and develop as individuals, it helped us establish the foundation for our marriage. We didn’t even know where Broken Arrow was, but it was the greatest decision we have ever made. We learned so much about the foundational truths of faith and how to love people, which is so important. We had a lot of challenges while we were in school. But in all of them, God showed himself mightily.

“I will never forget the times we would see Pastor Hagin dedicate babies at church while we were believing God for a child. When it happened, our son arrived three months early, weighing only one pound and 13 ounces. But at Rhema, we learned about a God who heals the sick and raises the dead, and that faith works! Faith works every day! And Rhema has never changed its message. There is such clarity in its message, and that is why it’s reaching the world!” // Henry and Ella Looney (’89)

‘Rhema Was the Obvious Choice!’

“At one point in my life I decided that when I was old enough to choose for myself, I would be done with church. I didn’t want to go anymore. I didn’t see a lot of life in it. Then my life changed when I went to a church pastored by a Rhema graduate. I heard the Word of God in a way I never had before. That put me on a quest to know God, and He began to drop in my heart that I was called to ministry. For me, Rhema was the obvious choice!

“My time at Rhema was so precious. It was a season of much growth. I was very young—straight out of high school! Nowadays, there are many ministry schools one can go to. But at Rhema, all the instructors have so much valuable experience. Every day you just get loaded down with truth and excellence! Sometimes I go through a problem and realize I already received the answer 23 years ago in a Rhema class! You just receive so much in the Word, in the Spirit, and in practical knowledge . . . it’s the full package! I don’t know of any other place that has Rhema’s track record and has produced so many world-changers. It’s been an honor to be a part of it!” // Chris Pilkerton (’98)

‘Rhema Taught Me How to Stand Firm on the Word’

“I followed Kenneth E. Hagin and read his books; that’s how my journey with Rhema started,” shares Nigel. “But it wasn’t the books necessarily that brought me to Rhema. It was just a hunger for God. It wasn’t wanting to be a pastor, teacher, prophet, evangelist, or anything like that. I just wanted to know more about God. I wanted to go for several years before but never made the decision to. Then one day I told the Lord, ‘If You supply, I will go.’

“I remember like it was yesterday. I was at a church in Alabama and a couple whom I barely knew came up to me and asked to speak to me after service. Later they said, ‘Are you going to Rhema?’ At that time I had never talked with them about Rhema. It was supernatural. I told them, ‘I haven’t made a decision, but I told God if He would bless me and show me that this is what I’m supposed to do, I would go.’ Then they said, ‘God told us that we’re supposed to supply and meet all of your needs for Rhema!’ They handed me a $4,000 check. I was blown away! God’s ways are always higher than ours!”

Tracy adds, “I simply had a desire to leave my environment and the atmosphere I was once a part of. I was ready to do what God called me to do, and I was committed to separate myself to really hear from God about His calling for my life. Rhema taught me how to stand firm on the Word regardless of what was going on around me. It established the firm foundation that allowed me to go off and do what God has called me to do. Which now plays into our marriage, our family, and what we are called to do together!” // Nigel and Tracy Arnold (’12)

“My parents went to Rhema and graduated in 1982, so I felt like I needed to follow in their footsteps. But when I got there, I realized I needed Rhema for myself. It was there that I really felt qualified and confident enough to follow God and pursue the call He had for my life. Rhema gave me the tools that I needed.

“Sometimes there is a lot of fear of the unknown when it comes to following God. There are many questions. Can I do this? Where is this going to take me? How is it going to work? There’s so much you don’t know. I believe many people hesitate to step out and follow God because of the unknown. But it was really my time at Rhema that gave me the confidence to say, ‘It doesn’t matter what I know in the natural. I know that God is in control, and He’s going to take care of me if I just obey Him.’

“That’s what I learned at Rhema—obedience! I learned to follow God no matter what and never give up! I graduated from Rhema with the mentality that if I do my part, God will always do His part. I tell people all the time, ‘I am married, I have two children, and I have a really good life. But my years at Rhema were some of the best of my life, and that is no exaggeration!’ ” // Robert Conover (’02)

“My love for the Lord skyrocketed when I was at Rhema. It’s like I fell in love with Him all over again—the teaching, the classes, and more importantly the presence of the Lord that is always there. The Word and God’s presence are the two aspects of Rhema that laid an eternal and steady foundation in my life that affects who I am today.” // LAURA MCNEESE (’08)

At Rhema, we learned about a God who heals the sick and raises the dead, and that faith works!

Every day you just get loaded down with truth and excellence!