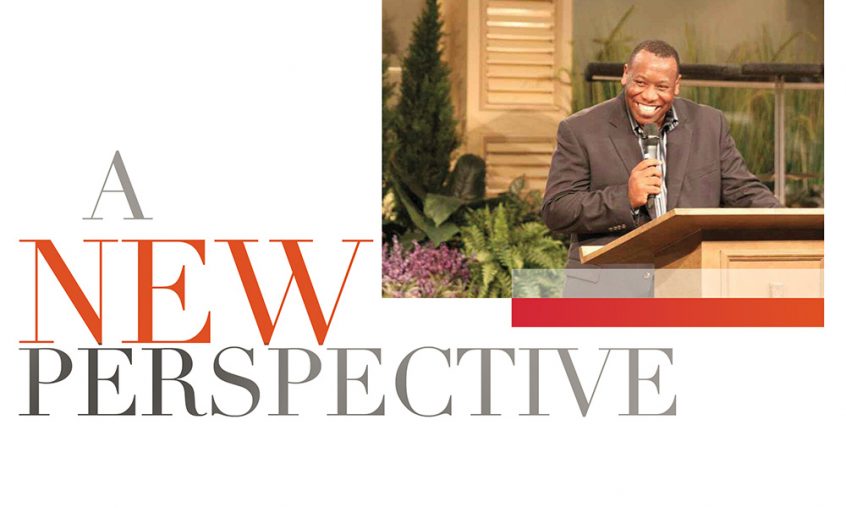 WAILS PIERCED the air incessantly. The church was filled with mourners distraught over the untimely death of a loved one. Nurses were on hand to attend to those overcome with grief. But neither they nor the preachers could calm the atmosphere.

Phillip Slaughter—a 1989 RBTC graduate and 1993–2004 Rhema Singers & Band member—was a classmate of the deceased woman. He was slated to sing at her funeral, number four on the program. Three ministers preceding him were unable to quiet the pandemonium of screams, tears, and despair. Phillip wasn’t surprised by the anguish expressed, but he knew that God had something better than sorrow and heartache to bring to this gathering.

“God, how can I sing in this chaos?” he silently pleaded. “What should I do?” Phillip got quiet and dug a little deeper into his heart to hear God’s voice. As he took the microphone, he knew what to do. But instead of singing, he began to speak.

“It’s joy time now,” Phillip stated with simplicity and compassion. “Scripture says that ‘weeping may endure for a night, but joy comes in the morning.’ It’s important before you leave this place today that you know how to tap into the joy of the Lord.” The initial words did not seem to have much impact.

His voice cut through the commotion with bold authority, “Now everybody say JOY because that’s where we’re going. We’re going toward joy.” The Holy Spirit and the congregation kicked in!

Phillip continued, inspired with just the right words to lift people’s hearts, “She came to this altar and gave her heart to the Lord just a few weeks ago. Think about the fullness of joy that she’s enjoying right now! Now everybody say JOY and let’s celebrate with her!”

The atmosphere did an about-face, and the entire spirit of the service changed. Reflecting on that day he thought, “I could have created a riot!” But instead, God did what He does so often through Phillip—shift the atmosphere and help people experience a new perspective.

A Shift in Perspective

One very personal experience shifted Phillip’s perspective forever. As he took the stage to sing before a well-known minister preached, he was already aware that he shouldn’t get the service “all ramped up.” With the mellow teaching style to follow, he wasn’t surprised when he felt led to sing “Amazing Grace.”

As the melody floated through the auditorium, Phillip felt as if he came out of his body. He watched himself sing from a place high up in the air. It was as if God said, “I want you to see from My perspective. I want you to see the anointing that I’ve placed on your life. It will manifest in this environment.”

Enveloped in what he can only describe as a “God place,” Phillip recalls a total shift in the service. Instead of preaching, the minister received words of knowledge for people and ministered powerfully to those who were sick.

Many approached Phillip afterward and said, “Something happened with you. Your singing was different!” But he didn’t share what occurred with anyone. He knew by listening to Kenneth E. Hagin talk about similar experiences that such things should be treated as sacred.

Phillip laughs, “I still don’t know how to explain it to this day!” Yet that unexplainable, sacred moment marked his life and ministry. “It took the ‘entertainment side’ out of me,” he says. Whenever the temptation to perform rises, an internal reminder rings, “No, this is a ‘God thing.’ This is the anointing on me.”

Shifting away from performance and into God’s perspective has become a way of life for Phillip. Not only does he personally live this way, but it is how God uses him to draw other singers, musicians, and ministers into deeper things. Phillip goes there first and lets them see another place.

In another perspective shift, God challenged Phillip and said, “You’ve been around healing. When are you going to do something?” Traveling in ministry with Kenneth E. Hagin and others, Phillip was familiar with the tremendous healing anointing on their lives.

Even so, Phillip had never really flowed in ministry along those lines, and the Lord’s question was a challenge for him. But God wouldn’t let the matter rest and reminded him of the people suffering with sickness at his home church. God kept speaking inside, “You have something. When are you going to use it?”

As a result, Healing Encounters began. Phillip’s gentle simplicity shines as he describes the premise. “There’s no hype, no music, nothing. It’s as elementary as possible, even down to the wording. We’re just doing the basics. ‘God is good.’ ‘God’s not mad at you.’ And we see people get healed.”

Each encounter is usually three days with a one-hour teaching each day. Phillip focuses on God’s Word from the standpoint of what it can do for people when they’re not at church. He shows them how to tap into the Word for themselves.

Unless the Holy Spirit leads, there is no laying on of hands or personal ministry. Phillip presents a practical perspective to the attendees: “This is what you get when you’re lying at home, not feeling well, and you open the Bible. There’s just the sound of your voice reading, ‘The Lord is my Shepherd.’ This is how you’re going to recover.”

Testimony after testimony comes back as people learn to work one-on-one with the Word of God. Tumors disappear. Hips are healed. Surgeries are no longer needed. Kidneys are working.

One woman came to the sessions in the late stages of cancer. She was in bad shape, but she grabbed on to the Word. The sessions made it easy for her to see that healing was already “done.” She stopped “trying to get it.” Her perspective shifted, and she learned to walk in what Jesus finished. She is totally cancer free today!

Another woman came to Healing Encounters barely able to move. Everyone there saw God’s goodness work in her. The cane she relied on is now a thing of the past. She’s excited and can’t get enough of saying the phrase, “God is good!”

Those familiar with Phillip’s ministry know that a shift into joy often blossoms wherever he goes. Whether he plants the Word through music, teaching, or demonstrations of the Spirit of God (which could be anything from prophecy to prayer to miraculous breakthrough), people experience newfound freedom.
Visit PhillipSlaughter.com for more information!

SIGNS and WONDERS to be seen

SOULS to be brought into the Kingdom of God