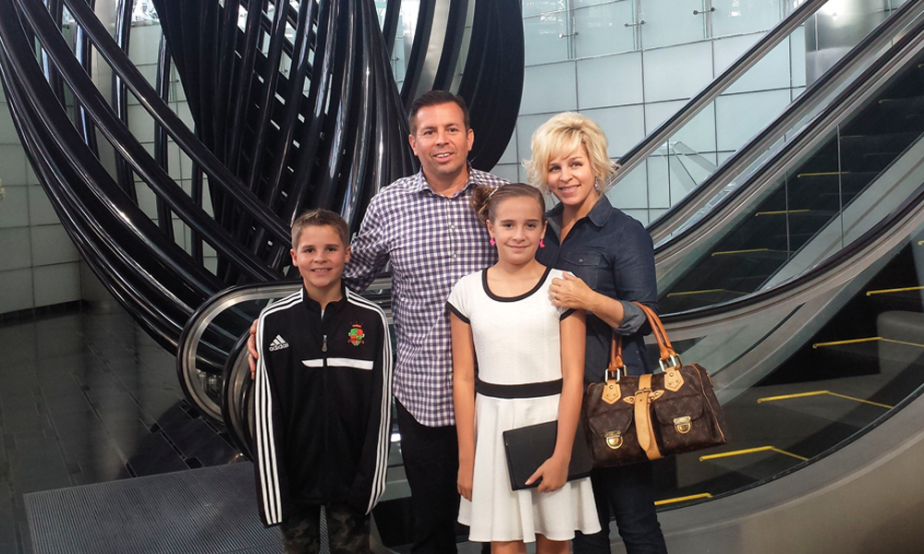 IN RESPONSE to Saddam Hussein’s invasion of Kuwait in August 1990, the U.S. began a large-scale military activation. Joe Hernandez, a 20-year-old Marine reservist, had just started his studies at Rhema Bible Training College. Only two months into his schooling, he was called to active duty in Desert Storm.

When Joe arrived in the Middle East, his unit formed a perimeter boundary around Kuwait City. Working in the scorching, 100-degree heat, Joe was positioned in a foxhole. His post was in the middle of smelly, rotten garbage in the city’s landfill!

Joe was a relatively young Christian then. Before coming to Jesus, he was addicted to drugs and alcohol. As a teenager and even as a child, he constantly lashed out at everyone and was quick to pick fights. In 1989, only a year before being deployed to Kuwait, Joe gave his life to the Lord at a Kenneth E. Hagin crusade in Anaheim, California.

Stationed in the abrasive desert sand with many long hours to fill, Joe immersed himself in the Word of God. He quenched his thirsty soul by listening to Kenneth E. Hagin cassette tapes, reading his Bible, and praying for hours on end. He often wondered if one day he would return to the Middle East.

Through God’s Word and prayer, Joe began to change inside. Under that blazing hot desert sun in the middle of a garbage heap, the chains of addiction melted off of him. Gradually, a burning love for the people of the Middle East was kindled in his heart. His unceasing prayers paved the way for what he is doing today in Dubai.

His unceasing prayers paved the way for what he is doing today in Dubai.

“We’ve been looking at our map,” they said. “We have people in Africa, Asia, Europe, and the Americas. We’ve been praying that God would raise up someone to go to the Middle East.”

Not knowing of this exchange, Kenneth W. Hagin had a word for Joe during an evening men’s conference service: “Joe,” he said, “you’re on the right track. Keep going in this direction. This is the will of the Lord for you.”

Over 200 nationalities are represented in Dubai. It’s a transient city. People usually live there for three or four years and then return to their home country. It has become the melting pot of the Middle East.

Within a four-hour plane ride from Dubai, you can reach 4.5 billion people—about 60 percent of the world’s population. With the population exploding in Asia and Africa, Dubai is predicted by some to become a world-travel hub.

Dubai is a pivotal city, and today is a critical time. Although there are many restrictions, Dubai is one of the few places in the Middle East where it is legal to preach the Gospel. The window of opportunity is open and the need for a Rhema Bible Training College campus in Dubai is vital.

Joe and Craig W. Hagin have met with pastors and business leaders in Dubai. They’ve been welcomed with open arms and tremendous favor. As in so many other nations, Kenneth E. Hagin’s books have paved the way to make this day possible.

Joe and Danille’s vision is first to establish an international Rhema church. They believe the church will have a positive effect on surrounding nations. The next step is to open a Rhema Bible Training College campus in Dubai.

It would be difficult for someone from Afghanistan, Pakistan, or any Middle Eastern country to obtain a visa and raise the necessary finances to attend Rhema USA. But it would be easy for anyone in this region to come to a Rhema campus in Dubai and receive the same training that they would in the U.S.

Echoing Kenneth E. Hagin’s 1979 prophecy, the sound of beautiful feet is being heard today in the Middle East, and love is the motivator. Joe and Danille believe that the men and women who attend Rhema Dubai will be carriers of the love of God and the message of faith to the people of the region. The Hernandezes are taking full advantage of the opportunities they have. They are committed to doing whatever it takes to ensure that this love is spread throughout the entire Middle East.

TO LEARN MORE about Joe and Danille Hernandez, go to joehernandez.us.